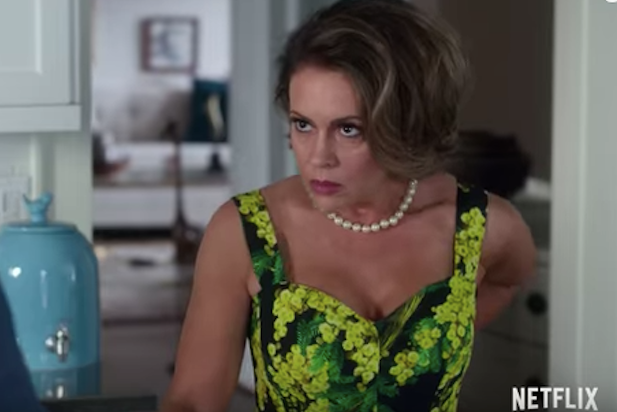 After Netflix released the trailer for its upcoming dark comedy series “Insatiable,” starring Alyssa Milano and Debby Ryan, Twitter commentators were quick to slam the movie for being “toxic” and promoting fat-shaming.

Milano has already addressed the criticism, tweeting that the film is intended to address “the damage that occurs from fat shaming.”

Netflix dropped the trailer on Thursday morning, showing Patty (Ryan) as an overweight girl who becomes thin after having her jaw wired shut and becomes the proverbial hot girl out for “revenge,” as she puts it. Milano plays her mother in the series.

Also Read: Miami Dolphins Who Kneel in Protest Could Get Suspended Up to 4 Games

The trailer soon became the subject of backlash, with Twitter users arguing that the plot promotes a “harmful” idea that fat women must become thin in order to be attractive and successful.

“So, anyone aware of Debby Ryan’s new movie coming to @Netflix?” wrote one detractor. “It’s called Insatiable, and I have a few problems with it, mainly that it’s essentially fat shaming people.”

So, anyone aware of Debby Ryan's new movie coming to @Netflix? It's called Insatiable, and I have a few problems with it, mainly that it's essentially fat shaming people. Allow me to explain more.

Milano responded to the criticism with a tweet on Thursday afternoon, writing, ” We are not shaming Patty. We are addressing (through comedy) the damage that occurs from fat shaming. I hope that clears it up.”

She was replying to a tweet from Twitter user @thecursedempath, who had slammed Milano after her initial tweet sharing the trailer, writing, “Really…..so she wasn’t able to take revenge until she was ‘conventionally attractive’? This is disgusting! You are the face of the Women’s Movement and THIS? Shame on you!”

We are not shaming Patty. We are addressing (through comedy) the damage that occurs from fat shaming. I hope that clears it up. Also, this article does a good job of explaining it more: https://t.co/WoR8R7TjqR #Insatiable https://t.co/GFkDdsn1uh

Along with Ryan and Milano, Dallas Roberts stars in the show from writer Lauren Gussis (“Dexter,” “Once Upon A Time”). “Insatiable” is produced by Ryan Seacrest Productions and Storied Media Group. The show will arrive on Netflix on August 10.

Bo Burnham’s film inspired us to look back

Bo Burnham's debut film "Eighth Grade" is getting praise for its realistic and touching portrayal of growing up today. It builds on a long line of movies that deal with the awkwardness of coming of age. Here are 17 of them.