Oprah Winfrey scored one of the best 15 minutes of television history when Roger Ebert and wife Chaz put themselves in front of millions of viewers on Tuesday.

After reading Chris Jones’ devastatingly honest Esquire feature on Ebert as he is now, ravaged by thyroid cancer and still missing his grumpy pal Gene Siskel, what more could this guy do to teach us humility? 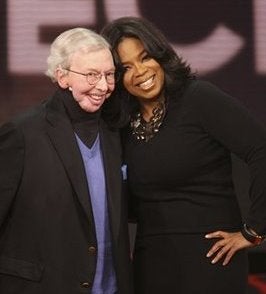 Turns out: plenty. This brilliant man, with half a working face and a doting wife who makes celestial angels look second-rate, had such joy in his eyes that you almost (almost) didn’t look at that strange half of a face.

What an amazing couple. Talk about committed relationships. If a scintilla of Hollywood marriages had the essence of what those two have, divorce lawyers would be full-time accountants. This is a marriage for the ages, for so many reasons.

But the courage it took to allow Queen Oprah into their lives and then to appear live, was stunning.

Whose eyes didn’t well up when Ebert related the root beer story and how just the smell of that beverage could make him swoon? For a guy who no longer eats or drinks and has nutrition piped into his veins, he sure has a great attitude.

And when we heard a sample of what his actual computer voice will sound like, thanks to computer geniuses in Scotland, it was both heart-breaking and wonderful. Heart-breaking because I remember that Chicago-inflected voice, attached to this burly, jowly guy who wore funky sweaters. And now that voice, compiled through hours of his own taped voice, is attached to a shell of what was, a disabled guy who still has those thumbs but not much of a jaw.

But he predicted the Oscars just the same. Why not?

And his physical appearance didn’t matter to him. He said so. Surprisingly, after our collective shock at seeing that Esquire picture showing his decimated jaw, we’ve grown used to his new look.

Oprah even gushed how Chaz was a "real woman” to stand by her man, and not in a country-western way. Remember the wedding vow that says something about better or worse? That’s the mark of a great woman. A great woman (or man) stays during the worst.

Ebert also was eloquent in expressing how we all should stop trying to look perfect, because that’s impossible anyway.

When he nonchalantly referred to how he looks now as just the way it is, I hope American women were listening. Teenage girls and Hollywood celebutards, especially. The essence of beauty is not silicone, Heidi, it’s the heart.