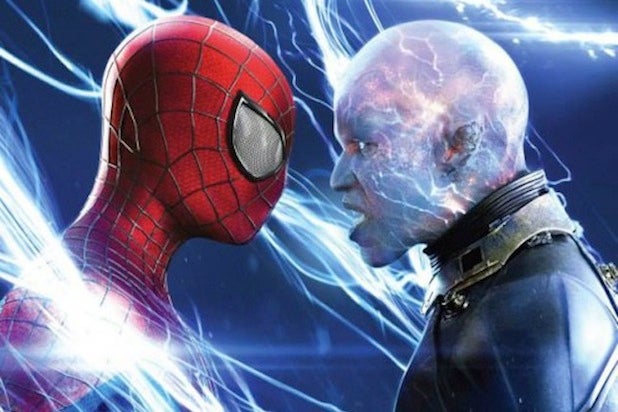 It swings into U.S. theaters Friday with two more sequels and two Spider-Man spinoffs in development — “Sinister Six” and “Venom” – and it isn’t cheap: “The Amazing Spider-Man 2” has a $250 million-plus production budget and a hefty marketing budget around $100 million.

The Marc Webb-directed movie opened overseas a week early and has already grossed more than $155 million, indicating a healthy appetite among all four quadrants for the webslinger’s latest adventure. The holds have been stronger for the sequel than the first film at the international box office.

On the down side, reviews have been decidedly mixed, and future Spider-Man movies won’t feature the palpable chemistry between series leads Andrew Garfield and Emma Stone, which has been a highlight of the rebooted franchise thus far.

Why does it matter? Because unlike many of its Hollywood counterparts, Sony does not have franchises in its library on which to build future tentpole movies. Spider-Man is one of the precious few titles with a significant enough fan base to consider building out a universe of future movies.

The bedrock of that universe appears to be Oscorp, the nefarious company that connects all the characters. Peter Parker’s father (Campbell Scott) worked there and in “The Amazing Spider-Man 2,” so do his love interest Gwen Stacy (Stone) and new nemesis Max Dillon (Jamie Foxx), aka Electro.

Oscorp, of course, is named after Norman Osborne, who leaves the company to his son Harry Osborne, one of Peter’s old friends who is eventually forced to assume the identity of the Green Goblin due to a genetic affliction, which only Peter’s blood can cure. In “Amazing Spider-Man 2.” Dane DeHaan steps into the role of Harry, played by James Franco in Sam Raimi‘s Spider-Man movies.

The studio offers a teaser for “Sinister Six” at the end of “Amazing Spider-Man 2,” the sort that’s now expected by comic book movie audiences thanks to Marvel. The brief scene teases Oscorp creations, but because it is accessible via the app Shazam, some fans are grousing fans that they could not see it.

A Sony insider told TheWrap that the studio wants Spider-Man fans to leave the theater thinking about his next adventure, and the Shazam initiative was another way to do that. But what about the movie they just paid to see? Is that already an afterthought since the studio has already sold the tickets?

There’s an inherent danger in trying to connect every movie to a larger universe. Handled well and it can pay off, as evidenced by Marvel’s “The Avengers.” Handled poorly, the strategy can damage the core movie brand and turn off loyal fans.

It’s unclear whether Spider-Man is going to make an appearance in “Sinister Six,” though he’s not expected to in any significant way. After all, star Andrew Garfield needs a break between “Amazing Spider-Man” movies, which Sony has scheduled for release every other year for the next four years. “Part 3,” which Webb has committed to direct, is due on June 10, 2016, while “Part 4” will hit theaters on May 4, 2018.

Without Spidey, will the movies have the same appeal? What good are his villains without a hero to torment? That’s the question many fans are asking as the studio plans the spinoffs.

Already, most complaints about “The Amazing Spider-Man 2” are that it’s overstuffed and yet undercooked. Critics have singled out Webb and his army of screenwriters for spending too much time setting up the next movie in the Spider-Man universe and not enough time establishing proper character motivation.

Still, “Amazing Spider-Man 2” is on track to gross nearly $100 million this weekend, and Sony is hoping it will gross a cool $1 billion worldwide.

While that goal may not be out of reach, the studio should be mindful of not blowing its goodwill with audiences. The public loves the Spider-Man character and they want the franchise to succeed, but Webb would be wise to stick with what he does best rather than trying to appease comic book fans with CGI spectacle. It’s the characters that are loved.

If Sony brass, including powerful studio chief Amy Pascal, lose sight of that they might find themselves in Wall Street’s crosshairs. And even Spidey might not be able to rescue them from that.