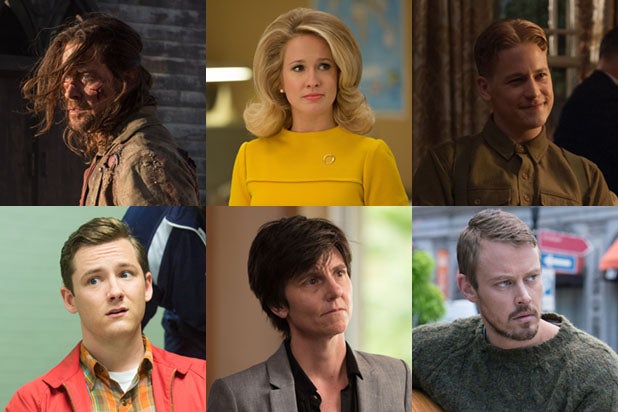 “One Mississippi”
This dark comedy, loosely inspired by comic Tig Notaro‘s life follows Notaro as she returns to her childhood hometown in Mississippi to deal with the unexpected death of her beloved mother. Reeling from her own recently declining health, Notaro struggles to deal with her emotionally cold stepfather and tries to cope with losing the one person who truly understood her.

This show is a hit from start to finish and it’s not surprising given the creative talent involved: the executive producers are Nicole Holofcener (who also directed the pilot), Louis C.K. and M.Blair Breard (the talents behind C.K.’s FX hit show). The pilot script by Diablo Cody is spare and touching. Notaro’s performance is jaw-droppingly great and Casey Wilson is also sweet in her guest appearance as Tig’s girlfriend. –D.G.

“Z: The Beginning of Everything”
Christina Ricci stars as Zelda, the wife of iconic American author F. Scott Fitzgerald (Gavin Stenhouse) and a young woman living with her sisters and parents in Montgomery, Ala. in the 1910s. Zelda desires more than her situation can provide, despite being the well-heeled daughter of the town’s judge. She drinks, smokes and kisses random boys, all of which have given her a perfectly hussy-like reputation.

Zelda’s sharp tongue is enviable, especially when she hurls sweet Southern insults at anyone in her way. Old-timey wit is a true delight and “Z: The Beginning of Everything” offers delicious snark in spades. –G.R.

“Highston”
Highston Liggetts (Lewis Pullman) is a kind and curious 19-year-old struggling to find his place in the world. As a coping mechanism, Highston imagines a constantly changing roster of celebrity friends (Shaq and musician Flea in the pilot) who provide him with comfort and advice — much to the concern of his bewildered but empathetic extended family. Chris Parnell and Mary Lynn Rasjkub star as Highston’s parents.

From the pen of “Nebraska” screenwriter Bob Nelson, this is a slight, charming story along the lines of the classic play “Harvey.” Lewis Pullman’s performance is genuinely sweet and engaging, but after watching the pilot, we’re skeptical as to whether this is a sustainable concept for a series. –D.G.

“Good Girls Revolt”
Based on Lynn Povich’s book “The Good Girls Revolt: How the Women of Newsweek Sued their Bosses and Changed the Workplace,” this drama couldn’t be more timely. The show is set in 1969, as a cultural revolution took hold and there was still one place that resisted change: newsrooms. The show follows a group of young female researchers at “News of the Week,” who ask to be treated fairly, which meant being allowed to be more than researchers and secretaries. Their requests spark changes that include disrupted marriages and sex lives, as well as new friendships and bonding between the women.

The pilot does a good job of using big cultural events as a lens through which to view impending cultural changes. The cast includes Anna Camp, Chris Diamantopoulos, Erin Darke, Hunter Parris and Jim Belushi, and they’re all solid players, with Genevieve Angelson especially good as Patti, a young woman who is many laps ahead of the rest of the women she works with, in terms of consciousness and sexual liberation.

There’s a team of powerful women behind the cameras as well, including executive producer and writer Dana Calvo outlines the cultural battlelines well. –D.G.

“Edge”
Revenge is sweet in the west.

After the horrific murder of his brother and burning of his home, Edge (Max Martini) sets out for the small, corrupt town of Hate to avenge his sibling. Once there he butts heads with the dastardly Sheriff Ben (William Sadler), who is determined to find gold hidden by slaves during the Underground Railroad days. Edge and Big Ben are instant enemies who share a blood lust so intense the pilot is almost impossible to watch with both eyes open.

The “Edge” tries so hard to be Quentin Tarantino does “Deadwood,” but without the clever writing and charismatic characters it turns out to be just another gratuitously violent and clichéd western soap opera. –G.R.

“Patriot”
Writer-director Steve Conrad‘s “Patriot” follows two brothers who could not be more opposite if they tried. Edward (Michael Chernus) is a senator with a questionable home life and John (Michael Dorman) is a folk-singing Iraq War veteran. Their father Tom (Terry O’Quinn) works for the state department and uses his two sons to do off-the-books dirty work that he does not want to have on his hands.

The pilot is a slow burn, but worth it for characters that are as mysterious as they are rich. Writing this funny and dark is perfect for episodic storytelling and Conrad found the perfect cast to act out his craziest whims. –G.R.