The creators of “American Horror Story” have kept everything about the show’s sixth season under wraps — but on Tuesday the review aggregation site Rotten Tomatoes briefly listed what could be the official title of the new season.

The site listed the sixth season as “American Horror Story: The Mist” — but removed that title from the show’s page a few hours later.

Representatives for Rotten Tomatoes and FX have not yet responded to TheWrap’s request for comment.

Show creator Ryan Murphy has been adamant about maintaining secrecy about the theme and setting of his FX horror anthology, which returns for its sixth season on September 14.

Despite the fact that several trailers have been released, FX president John Landgraf has said that many of them are misdirects and have nothing to do with the actual plot.

Landgraf said earlier this month that Murphy and FX “went out and made many more trailers than you’ve actually seen for hypothetical seasons of ‘American Horror Story,’ meaning different genres and different places. And one of them is accurate, and the others are just misdirects.”

A few trailers dropped that alluded to multiple potential themes, including one showing a “mist-like” theme with a monster crawling out of the haze. But fans gravitated towards one promo that seemed to suggest a storyline involving a Charles Manson-like cult. 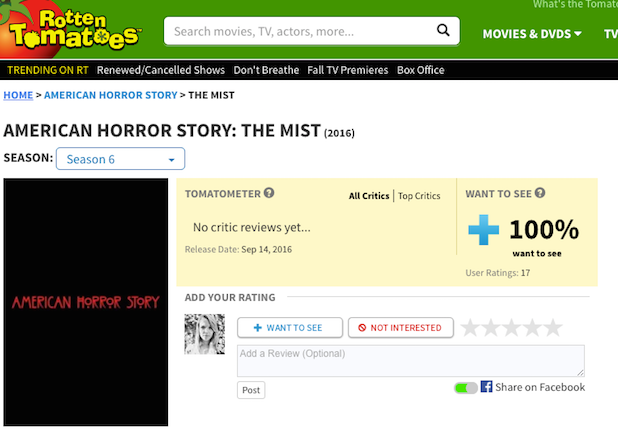 “American Horror Story” Season 6 is scheduled to return on September 14.