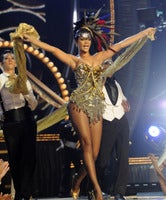 A three-hour cavalcade of musical performances that included Rihanna, Jay-Z and the Black Eyed Peas managed to do what few other shows have done all season Sunday: Compete with NFL coverage on NBC.

Running from 8 to 11 p.m. Sunday on ABC, the “American Music Awards” managed to eke out a tie in the key ratings demographic, adults 18-49, with a “Sunday Night Football” telecast featuring the New York Jets and the New England Patriots. According to Nielsen Fast Affiliate numbers, both programs averaged a 5.5 rating/13 share in the key demo.

The 18-49 number represented an 8 percent year-to-year increase for the “AMAs.”

Even better for a program now challenging the Grammys as the top music awards show on TV, it grew its viewership for the fourth straight year, adding 2 million TV watchers for a total of 14.2 million Sunday, a 16 percent increase.