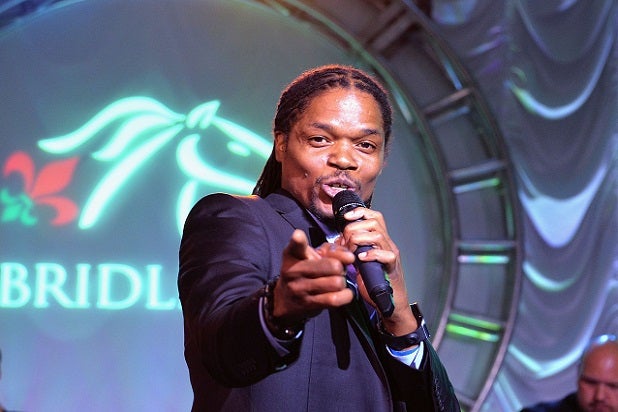 A singer who won the NBC competition series “America’s Got Talent” in 2011 has been arrested on a domestic violence charge, the Charleston Gazette-Mail reports.

Landau Eugene Murphy Jr. allegedly hit a woman with a golf club, causing injuries to her head and face and leading to her hospitalization during a Monday incident at Murphy’s Whitman, West Virginia home.

A criminal complaint alleged that Murphy also slapped the woman and slammed her head into a sidewalk.

According to the Gazette-Mail, Murphy was arrested on the misdemeanor charges of domestic battery and domestic assault and booked into jail Monday night. The singer was released on $3,500 bail shortly thereafter.

In a statement published on Murphy’s Facebook page Tuesday, the singer acknowledged an “unfortunate incident” at his home Monday.

Murphy said that his girlfriend and others “trashed” his home, leading to a “heated argument.” The singer added that he acted in self-defense, after being attacked with a golf club and a knife. (Read the full statement below.)

“An unfortunate incident occurred at my home Monday evening.

My girlfriend, her friends ,and family she had invited over had trashed the home. This has happened several times previously while I was away on tour.

I asked them all to leave, a heated argument happened between us and she began destroying things with a golf club. She then attacked me with the golf club-and a knife. In defending myself, she obtained some bruises and swelling on her face. I did not strike her. She filed a complaint against me anyway.

I was raised to respect women, and if not provoked and feeling I was in danger, I would never have defended myself in this manner. I am very sorry for the way domestic incident was handled.

I apologize to my fans everywhere and to the people of Logan County and West Virginia for this incident. It should never have happened.”

Burke Allen, his long-time manager and friend, added, “Landau Murphy is an extremely decent, loving, caring man. He faced a very disturbing, and indeed dangerous situation on Monday night. When all the facts are out, it will be clear that his actions were necessary and appropriate.”