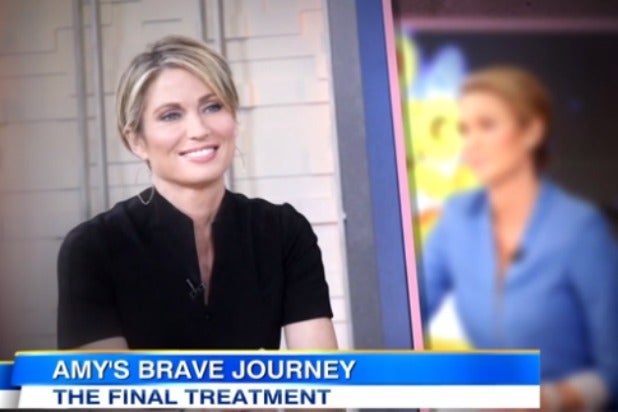 “This morning during a segment about Hollywood casting, I mistakenly said ‘colored people’ instead of ‘people of color.’ I sincerely apologize. It was a mistake and is not at all a reflection of how I feel or speak in my everyday life,” Robach said in a statement.

“Now we all know Hollywood has received recent and quite a bit of criticism for casting white actors in what one might assume should be a role reserved for colored people,” Robach said on Monday’s edition of the ABC morning show.

The term “colored people” was used during segregation and is often considered derogatory. Mary Jane Watson has historically been a white character, famously played in the Sam Raimi series of Spider-Man movies by Kirsten Dunst.

Oddly, Coleman’s race was also at the center of a controversy when “Fashion Police” co-host Giuliana Rancic mocked her hair, which resulted in Kathy Griffin and Kelly Osbourne leaving the E! show.

Ok @GMA please talk to #amyrobach. If she says #coloredpeople again I'll have to find a new a.m. program to watch-she gets a pass this time

@arobach What apologize for your "colored people" remark? Isnt that what the NAACP stands for? People looking to fight even against nothing.