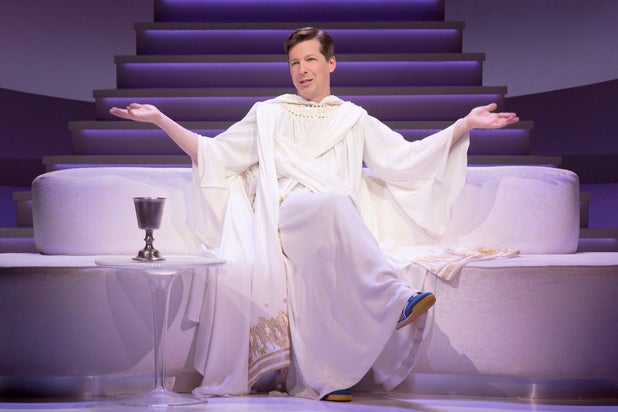 The Lord works in mysterious ways, perhaps none more mysterious than by embodying Emmy-winning sitcom star Sean Hayes in the uproarious virtually one-man show “An Act of God,” playing through March 13 at Center Theatre Group’s Ahmanson Theatre in downtown L.A.

Or as Hayes tell us at the top of the 90-minute, intermission-less show, “Though… my essence is formless tonight I have chosen to appear in form, specifically that of beloved star of stage and screen Sean Hayes.” Why Sean Hayes, you might ask? “First of all, we’re both with William Morris,” he notes — one of several L.A.-centric references that have been added to the show since it debuted last summer on Broadway.

The second reason, of course, is that Hayes is available while the New York production’s designated deity, Jim Parsons, is busy shooting the ninth season of “The Big Bang Theory.”

The two performers are very different, but the recasting suits the new West Coast locale. Parsons played the Almighty with a certain laconic understatement that made his occasional Old Testament-style outbursts all the more striking. But Hayes approaches his divine role with a kind of intelligent petulance that only occasionally verges on shtick, bouncing on his banquette center stage and mugging for some unseen camera. His God can be a bit of a brat, an unapologetic narcissist not unlike Jack from “Will & Grace.”

“I made mankind in my image,” he says at one point, “and I am an asshole.”

It helps that Joe Mantello directed both productions and that the script, by “Daily Show” alum David Javerbaum based on his book and Twitter feed, is very funny indeed, with a higher proportion of punchline hits to misses than you might expect of a routine built on studied irreverence.

Also Read: Sean Hayes Has Second Coming on Broadway This Summer in 'An Act of God'

The premise is simple: God comes to the City of Angels to offer an updated reboot of one of his greatest hits, the 10 Commandments (“I never meant it to define me,” he laments). Along the way, he offers revisionist takes on everything from the Bible (the good book takes some liberties) to evolution (“Neil deGrasse Pagan” is in for a surprise) to homosexuality (turns out there really was an Adam and Steve, and the latter was created when God put Adam to sleep: “fulsomely did I Cosby his nectar”).

Hayes is accompanied by two onstage angels, played by David Josefsberg and James Gleason, who don’t make much of an impression. More noteworthy is Scott Pask’s striking set and Hugh Vanstone’s lighting, which give a biblical scale to what might otherwise seem like a modest show.

“An Act of God” has been updated since its run last summer, with fresh references to El Nino traffic, Donald Trump and even a post-Iowa caucus Ted Cruz. (“I mean, the look on Ted Cruz’s face when I told him he was the anointed one destined to usher American into a new golden age of Christendom…. that’s comedy gold, right there.”)

But the most pointed targets may be the ones that hit close to home in Hollywood. Kanye, Justin Bieber and Matthew McConaughey each get their turn in the celestial hot seat. “Celebrities are like me: adored, worshipped, tantrum-prone,” God explains. “I get why they take My name in vain. I get why they take all kinds of things in their veins.”

The show even resolves a long-standing theological mystery: It seems there really are rimshots in heaven.