The first footage of “Blonde,” starring Ana de Armas as Marilyn Monroe, has arrived. And in it, she’s nervously waiting for an important arrival herself.

The black-and-white footage largely focuses on one scene, in which the starlet is in the makeup chair, but crying uncontrollably. As she pleads with her mirror, “Please come. Don’t abandon me,” she’s assured by an offscreen voice that “she” is coming.

It appears that “she” is actually Marilyn herself as, at the end of the footage, Norma Jeane Mortenson disappears, and Marilyn Monroe fully comes to the surface. You can watch the full teaser for “Blonde” in the video here and above.

Interspersed in the teaser are glimpses of some other iconic Marilyn moments, including the photo op in which she stood over a steam grate in her beloved white dress. Of course, the footage is underscored by one of Marilyn Monroe’s most popular songs: “Diamonds Are a Girl’s Best Friend.” Though, it is a haunting rendition. 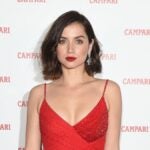 “Blonde” is based on the best-selling novel of the same name by Joyce Carol Oates, and promises to “boldly [reimagine] the life of Marilyn Monroe, exploring the split between her public and private selves.” With that reimagining, the film will also “blur the lines of fact and fiction” when it comes to the Hollywood icon.

The movie hits Netflix on September 23, and has been rated NC-17 by the MPA for “some sexual content.” It appears to be Netflix’s first original movie to land the rare NC-17 rating, and an individual with knowledge of the film said in March that “Blonde” has some adult, mature content and that the film’s writer and director Andrew Dominik did not want to compromise some of the more intense elements of the iconic actress’ life.