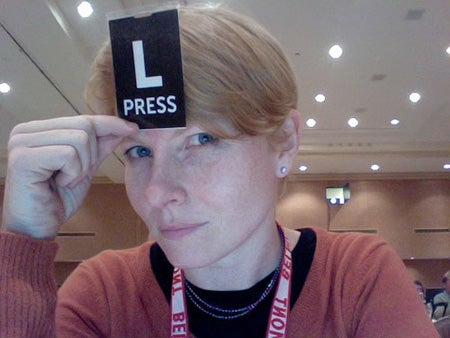 Here’s something new to consider when you’re executing layoffs at a media company in the Twitter Age: Try not to fire the guy whose wife has 1,225,114 followers.

Last week, roughly two months after acquiring the Congressional Quarterly, the Economist Group announced a reorganization of its new CQ/Roll Call group, resulting in the elimination of 44 editorial positions.

One of them was Chris Lehmann, a senior editor and the husband of Ana Marie Cox — the former Time and Wonkette blogger, current MSNBC contributor (she recently guest-hosted the “Rachel Maddow” show) and one rather prolific Tweeter.

Cox’s tweets were, at least initially, rather innocuous, offering general support to her husband. And bourbon.

But after a report surfaced that an additional senior editor, 27-year-veteran Brian Nutting, was allegedly fired for demanding that executives explain their rationale for laying off 44 of his colleagues, Cox’s tweets turned into something of a movement. She began concluding her posts with the ominous “#CQFAIL” tag and encouraged her 1.2 million-plus followers to “unfollow” CQ’s presence on Twitter, @CQPolitics.

She also tweeted: “FYI: there is a binding legal document keeping @lehmannchris from thanking/participating w/r/t #CQfail. But trust me, he’s aware of it.”

Meanwhile, Mediabistro’s FishbowlDC launched an interview series with the laid off staffers to help them find new jobs.

This is what brand marketers and PR pros refer to as a “crisis.”

As Reuters blogger Felix Salmon noted, "this CQ mess makes the Economist look positively evil. Do they know that?"

It doesn’t appear they do.