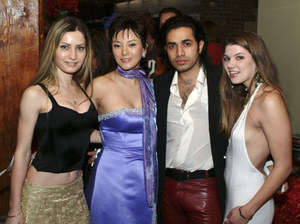 Trial Update: Two alleged victims of the former designer have testified this month. The first Heather, had a blonde bob and a sweet smile. She testified that when she was just 14 in 2003, Jon tongue-kissed her at a fashion event. She trembled and teared up on the stand. Jon “terrified” her, she said. Under cross-examination, she admitted that at the time of going to the police about the incident, she had not mentioned that she was terrified, a key component in proving sexual assault.

More troublesome was Holly Gavel, who testified that Jon had raped her, but was among the group of 11 who the prosecutors removed just before the trial began. She was nonetheless called to testify, presumably to establish a pattern of Jon’s behavior.

Brooklier: “Why didn’t you ask for help?”

Brooklier: “Isn’t it true that you have been lying throughout your testimony?

Gavel lived with Anand Jon, paid him rent, and worked as his assistant. After she was supposedly raped by Jon, she went with his mother and sister to India. Why? “I wanted to get away,” she testified, “and AIDS awareness is a very important thing people need to know about.”

Victims who are not credible are not value-neutral in this trial. They will tip the balance in favor of the defendant, whether or not he is guilty, and whether or not other plaintiffs are credible. One wonders what prosecutors believe that witnesses like Holly add to the case. If her story is not strong enough to stand up under scrutiny, witnesses like this, with fantastic tales of assault and weak rejoinders under cross, lend weight to the argument of the defense, that there is some kind of vendetta at work in this case.