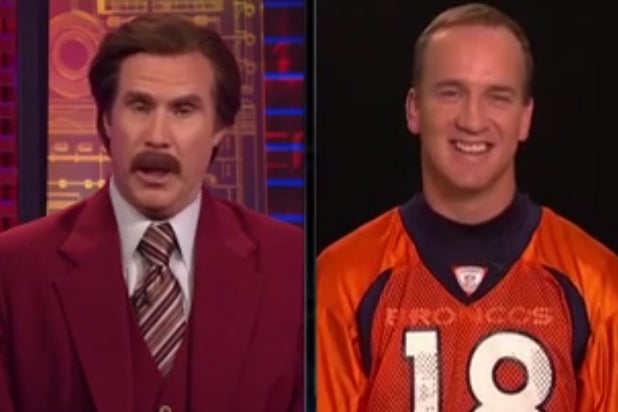 In “Anchorman 2: The Legend Continues,” Ron Burgundy heads to New York in to take its first 24-hour news channel by storm. In “real life,” the Will Ferrell character treks to Briston, Conn. Friday to take the first 24-hour sports and entertainment channel by the reins.

As TheWrap previously reported, Will Ferrell will host ESPN’s 6 p.m. ET “SportsCenter” in character on Dec. 6. Burgundy’s pancake breakfast partner, Champ Kind (David Koechner), will join him behind the desk.

This is not the first time that the maroon-suited, mustachioed, jazz flute-playing newsman has worked for The Worldwide Leader.

In fact, Burgundy has previously been on assignment for “SportsCenter” – and ESPN The Magazine – as the below interview with Denver Broncos quarterback Peyton Manning confirms.

In the clip, Burgundy marvels at Peyton Manning’s ability to successfully play the quarterback position without a mustache. The anchorman doles out the hard questions in the preview piece: like what Manning’s relationship is like with Thunder, the Denver Broncos glorious horsey mascot.

The Ferrell breakout character’s full conversation with Manning will be available in ESPN The Magazine’s “Interview Issue,” in mailboxes beginning Dec. 11, on newsstands Dec. 13.

This one is a little bit special, says Jack Obringer, senior coordinating producer for the show: “When the opportunity presents itself to have the quintessential ‘Anchorman’ guest host ‘SportsCenter, you take advantage of it,” he said in a statement. “I don’t know how to put this … but he’s kind of a big deal.”