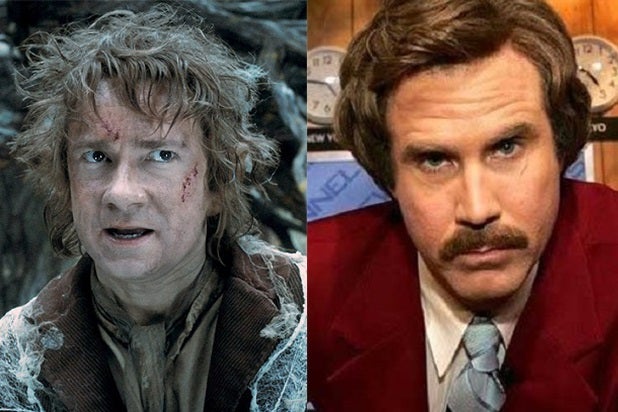 Ron Burgundy is expected to prevail in the box office battle against Bilbo, which gets underway Wednesday, when  “Anchorman 2: The Legend Continues” opens against the reigning No. 1 movie, “The Hobbit: The Desolation of Smaug.”

It’s been nine years since “Anchorman: The Legend of Ron Burgundy” played in theaters, but consumer awareness is definitely not a problem for the sequel, which will roll out in about 3,400 theaters, roughly 2,800 of which will offer early screenings starting at 9 p.m. Tuesday night.

Ferrell has been relentless, ubiquitous and pretty darn funny as the frontman in a massive Paramount marketing campaign that is among the broadest in recent memory. It’s been so effective — Ferrell’s Dodge commercials have upped Durango sales by 40 percent — that some observers have wondered if a backlash could set in.

“Overkill is always a possibility with this kid of saturation marketing, but in the end, that’s a risk worth taking for Paramount,” Boxoffice.com editor-in-chief Phil Contrino told TheWrap. “Even if there is a backlash, they’ve almost certainly reached enough people to offset it.”

In the sequel, the San Diego news team led by Ferrell’s Burgundy relocates to New York. Steve Carell, Paul Rudd, David Koechner, Christina Applegate and Kristen Wiig co-star in “Anchorman 2,” which was written by Ferrell and Adam McKay, who directs.

Also read: Ron Burgundy Is Taking Over the World: 5 Reasons He Might Be Wearing Out His Welcome

It’s difficult to find a comparable movie for “Anchorman 2,” because there aren’t many sequels that arrive nine years after the original (though “The Best Man Holiday” scored last month for Universal after a 15-year hiatus).

“It doesn’t seem like such a long time because it’s been such a big part of the pop culture landscape for years,” said Contrino.  The original “Anchorman” opened to $28 million in July of 2004 and went on to take in $85 million. It was a huge hit on DVD and video on demand, however.

Paramount, which is projecting a five-day total between $40 million and $45 million for “Anchorman 2,” used “Little Fockers,” another PG-13-rated comedy sequel, as a comp. That one brought in $45 million on a similar five-day window in December of 2010.

Not all the reviews are in, but “Anchorman 2” has been well-received by critics so far and has an 85 percent positive rating on Rotten Tomatoes. Its social media presence on Twitter and Facebook is very strong.

“Anchorman 2” was accounting for 46 percent of advance sales at online ticket broker Fandango on Tuesday morning, with “The Hobbit” at 26 percent.

“There’s a party-like feel to the movie, and it’s likely that happy vibe will be felt in theaters too,” Fandango’s Dave Karger told TheWrap. “We’re seeing a higher-than-usual number of tickets per transaction in ‘Anchorman 2’ sales, which may indicate groups of film fans celebrating the holidays with Ron Burgundy’s news team.”

“The Hobbit: The Desolation of Smaug” did $6.2 million on both Monday and Tuesday, upping its domestic total to $86 million. Globally, Peter Jackson’s second entry in the Hobbit trilogy has taken in more than $220 million in its first week.

The Oscar hopeful “Her” – written, directed and produced by Spike Jonze — will be opening in six theaters on Wednesday for Warner Bros.

Also read: Joaquin Phoenix Tells Amy Adams What It’s Like to Date a Computer in ‘Her’ Trailer (Video)

The fantasy romance stars Joaquin Phillips as a man who develops a relationship with a female voice (Scarlett Johansson) produced by his computer operating system.

Rooney Mara, Amy Adams, Chris Pratt and Olivia Wilde co-star in the R-rated “Her,” which was named best film of 2013 at the National Board of Review Awards and shared the L.A. Film Critics’ top honor with “Gravity.”

Fox is opening its CGI-live-action hybrid kids film “Walking With Dinosaurs” on Friday.

The PG-rated animated movie is based on the BBC TV series of the same name, and will be in 3,200 theaters. It’s an unusual film, like a nature documentary — only on 3D and special effects steroids, and narrated by a prehistoric bird (John Leguizamo).

The filmmakers shot the live-action backgrounds for “Walking With Dinosaurs” on location in Alaska and New Zealand. Later, the CGI dinosaurs were added, utilizing the Fusion Camera System developed by James Cameron and used on “Avatar” and “Life of Pi.”

Barry Cook (“Arthur Christmas”) co-directs with Neil Nightingale, a documentary director at BBC Earth. The script is by John Collee, who wrote both “Happy Feet” and “Master and Commander: The Far Side of the World.” Karl Urban, Justin Long, Tiya Sircar and Skyler Stone also provide voices.