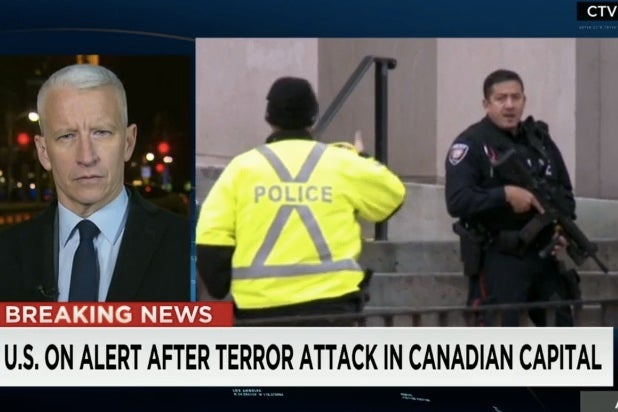 While reporting in Ottawa Wednesday on the parliament shootings, Anderson Cooper was asked by a local reporter for a photo. And the CNN host was not having it.

“No, I will not take a photo with you on a day where somebody was killed,” Cooper angrily told Sun News contributor Vandon Gene. “It seems wildly innapropriate.”

Gene then took to Twitter to take on the CNN star. He’s since pulled all his tweets, but here’s what he said:

.@andersoncooper EXPLOITS #OttawaShooting by flying to #Ottawa, but has decency to critizize me asking for a photo?

@andersoncooper I can’t believe CNN would employ you when you SWEAR to your fans. I covered this story properly. Check my tweets…

@andersoncooper I simply asked for a photo. YOU are exploiting this tragedy by flying to Ottawa from NYC. I just got out of a 12 hr lockdown.

.@vandongene dude, you were rude and asking for a selfie near where a soldier was killed. It was completely inappropriate. Think about it

.@vandongene I can’t believe any station employs you, and if you want to be a journalist, learn how to behave when covering a story

Gene walked back his comments Thursday.

I unreservedly apologize for my actions yesterday. It was completely inappropriate, disrespectful, and distasteful.