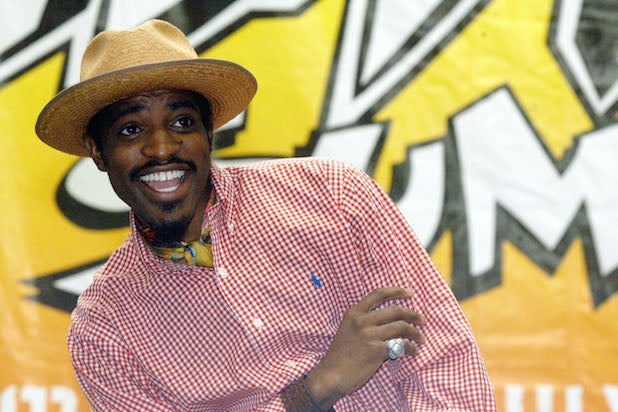 From Bono to Springsteen, it’s not uncommon for famous musicians to go busking and blow the minds of some fans who just happen to pass by. You can now add OutKast’s Andre 3000 to this time-honored tradition.

On Friday, NPR producer Antonia Cereijido was waiting for her flight at Los Angeles International Airport when she spotted a man playing a double flute. The impromptu performance immediately reminded her of Andre 3000’s woodwind solos on some of his past albums, and to her surprise, it was the rapper himself performing with a Mayan double flute.

“Now I’m like…I should’ve talked about how good his verse on Solo is,” Cereijido wrote in a follow-up tweet. “And how my mom once had a dream he taught our family to dance the hey ya dance and we had achieved the American Dream. W/E NO REGRETS.”

The man also known as Andre Benjamin has delved into many different artistic endeavors over the years. In addition to his work with Big Boi in OutKast, he starred and produced a short-lived, cult hit animated series “Class of 3000,” for the Cartoon Network that ran from 2006-2008. He has also performed the bass clarinet on a pair of jazz tracks he released on Mother’s Day last year. Most recently, Benjamin starred alongside Robert Pattinson in Claire Denis’ avant-garde sci-fi film “High Life.”

Check out some reactions from Andre 3000 fans about his unexpected flute solo, and a closer look at the instrument below:

Seeing Andre 3000 trending and thinking something bad happened but finding out my mans was just playing the flute pic.twitter.com/h0t4vBxPou

Bruh… Andre 3000 playing a flute in an airport terminal for 40 minutes is the most Andre 3000 story I could imagine. Keep ya heart 3 stacks… Keep ya heart. https://t.co/HAOLsEKBiG

just waiting for the day I run into Andre 3000 like everyone else does. pic.twitter.com/BcnEVwDbRH

I like the thought that I live in a world where Andre 3000 is just somewhere playing a harp/flute & some desperate rap artist sends out the Dre Signal, he shows up, drops a few bars on their track, saves hip hop once again, then goes back to his harp and his flute. He's the GOAT.