Bernie Sanders supporters stormed out of the Democratic Convention in Philadelphia and attempted to occupy the media tent after the roll call made Hillary Clinton the party’s official presidential nominee on Tuesday.

“We walked out because we were upset with the result, which I guess coming out of my mouth sounds kind of petulant, but it was a lot more than that. It was the fact that we feel like there was a lot of campaign fraud and different manipulation of the votes that occurred along the way,” Colorado alternate delegate and Sanders supporter Caitlin Glidewell told TheWrap.

According to witnesses, close to 100 Sanders supporters made their way inside the media tent before police stopped letting them in and several others stayed outside to protest. The Sanders supporters who secured a spot inside sat on the floor in a silent protest.

“I saw them kind of rush into the room … they were very peaceful. They had handkerchiefs over their mouths and they were holding up signs. There was a lot of police presence but there was no violence or anything,” volunteer Pam Petrashune told TheWrap. 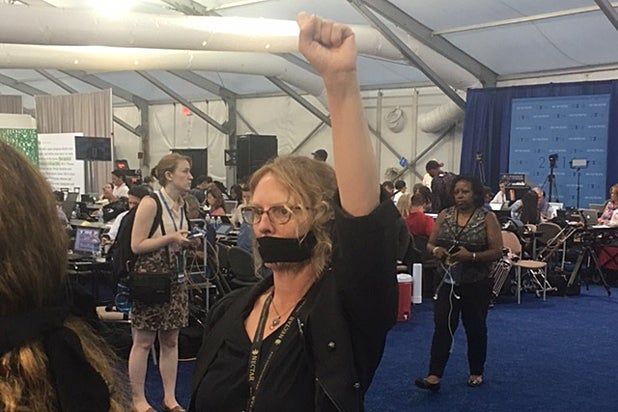 The DNC issued a formal apology to Sanders on Monday for leaked emails that suggested the party’s leadership conspired against him during the primaries in favor of then-presumptive nominee Clinton. The apology isn’t enough for some of Sanders’ most passionate followers.

Glidewell said they stormed the media tent because,”We needed to be heard. It has become clear that the DNC isn’t going to speak up about any allegations of election fraud or voter manipulation.”

“I was at the center in the beginning, it was a little overwhelming,” she said. 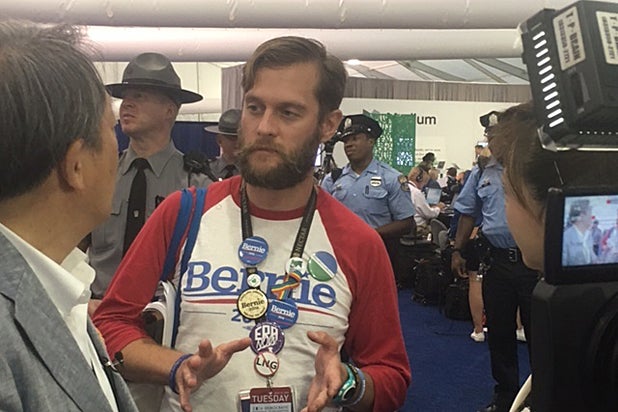 “Our voice is silenced. Rural gay voices are silenced by the political establishment,” a North Dakota delegate had written on his phone while refusing to talk.

“We needed to come in here and speak up about it ourselves,” Glidewell said.

A Philadelphia police offer told TheWrap he “doesn’t think” any arrests were made.