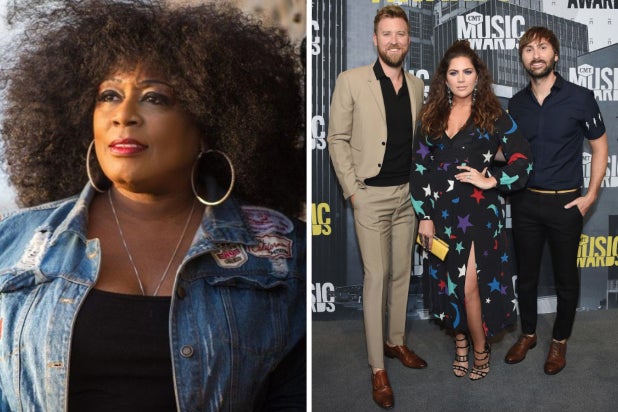 Anita White, the blues artist known as Lady A, has pushed back on a lawsuit recently filed by the country trio formerly known as Lady Antebellum, saying the seven-time Grammy winners are “minimizing my voice.”

White spoke in a conversation about the dispute with a Rolling Stone reporter, and her words were published as a lengthy op-ed on the magazine’s website Friday. She claims that the country band is dismissing her decades of work under the stage name in order to paint themselves as allies of Black voices.

“They want to change the narrative by minimizing my voice, by belittling me and by not telling the entire truth,” White said. “I don’t think of myself as a victim, but I’ve worked too long and too hard to just walk away and say I’ll share the name with them. They want to appropriate something I used for decades. Just because I don’t have 40 million fans or $40 million, that should not matter.”

White asserts that from the beginning she felt there was no way she and the band could both co-exist with the name Lady A and that the band was not interested in making any further changes. She says that though the band claims in its lawsuit it has used the trademark Lady A for years, she never had a problem being found by her stage name with search engines and streaming services — until now. Within a matter of weeks of the band’s announcement, she says, her music is being buried, including verifying her name for a new single she recently uploaded called “The Truth Is Loud.”

White asserts that the lawsuit, in which the new Lady A is suing White to say they are not infringing on the use of the Lady A trademark, is an example of the band trying to assert its “white privilege.”

“Not wanting a name that is a reminder to many black folks of how so much was taken from us: our freedom, languages, families, and even our names makes sense. However, to do so by taking the name on which I, a Black woman, have built my career in the music industry for over 20 years, is ironic,” White said. “Lady Antebellum to Lady A didn’t change the connotation or yield to them being inclusive. They are yet again using their privilege to take because I don’t want to share in the name. They brought this to the forefront. I didn’t. If they had been true to their word, their name would have completely changed. They have the means and the power.”

Also Read: Dixie Chicks Change Name to 'The Chicks:' 'We Want to Meet This Moment'

White also confirmed what the band had said in an earlier statement, that White had demanded a $10 million payment before she would agree to rebrand. However, White clarified that she requested the $10 million be split between herself and a donation to Black Lives Matter.

“I don’t want to have to share a name with you. And you shouldn’t be allowed to just get a slap on the wrist. I wanted my name. All I ever wanted was to keep my name in the blues genre doing what I did. I should not have to bend to [the band’s] will because they’ve got money,” White said. “So if you’re going to appropriate my name, I thought it was only fair I could rebrand myself with $5 million. I could help my community, I could help my church, I can help other artists. And that other $5 million was supposed to go to Black Lives Matter to help other artists with this very struggle. And it was for my seniors and youth. I’m not going to stop doing what I’m doing, but I’m not going to allow you to take something from me. I didn’t ask them to pay for it, but if you’re going to go that far and just disregard me altogether, then yes, I want to be compensated for it because I think they’re wrong.”

Band members Hillary Scott, Charles Kelley and Dave Haywood all previously met with White over a video call and proposed ideas such as recording a song together or appearing in a documentary together, but White says she felt unheard and that the conversations were just a means to allow the two Lady A’s to co-exist, which White felt was not possible. She even claimed that a screengrab from a Zoom call that the band posted to Twitter was to look good in the eyes of the public.

“They came back with their agreement, which didn’t address my concerns, and I knew what they wanted. They wanted a story that showed us getting along. They wanted me to make them look good in the eyes of the public, and that’s why that Zoom call was so important to them. It wasn’t important to me. I went along with it figuring maybe they’d keep at their word, but that didn’t happen,” White said. “They do this to make me look bad, like I’m just out for the money. I didn’t need their money before. I have a job that I’m retiring from, and I have music that I do. My life was happy before I met them. I do community work. You need to understand if you’re going to be an ally, you need to speak up bravely about what is going on. And if they’re saying they’re an ally, they are lying to the American public.”

The country band changed its name from Lady Antebellum back on June 11, they said, to remove the name’s slavery-era reference, only to later discover that White had been using the name for the better part of 20 years.