Maurice “Mo” Brighthaupt is a big man, and Thursday morning all 6-feet-6 inches of him lumbered into Department 104’s witness seat in the second of three days of testimony.
Anna Nicole Smith’s former bodyguard was here as a reluctant prosecution witness for the preliminary hearings that will determine if there is enough evidence to send three members of Smith’s posse to trial. 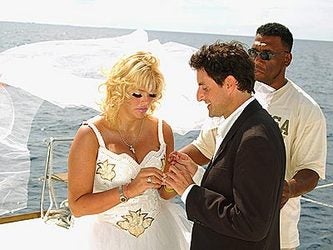 Those intimates include Smith’s attorney-cum-lover, Howard K. Stern; her psychiatrist, Dr. Khristine Eroshevich and Dr. Sandeep Kapoor.
The three were indicted last March on multiple charges for allegedly keeping Smith, the deeply troubled reality TV star and former model, illegally supplied with a nonstop buffet of prescription pain killers and sedatives that included Dilaudid, Methadone, Xanax and chloro hydrate.
Smith’s Feb. 8, 2007, death was attributed to a combined overdose of several drugs, though the accused are not charged with her death.
As a member of Smith’s inner circle, Brighthaupt (pictured above at wedding of Smith and Stern) was able to provide an eyewitness account of Smith’s voracious appetite for drugs and her state of mind during the last days of Smith’s life.
Under Deputy District Attorney Renee Rose’s prodding, Brighthaupt, in a languid drawl, tersely revealed that Smith had become so overcome by drugs that she would occasionally lose control of her bowels while passed out.
During one such incident in the Bahamas, Smith fell into her home’s swimming pool and sank to the bottom, forcing Brighthaupt, a trained paramedic, to dive into the effluence to retrieve and revive her with CPR.
Brighthaupt also recalled how Stern would prepare a tray with a fistful of pills for Smith to consume at specific intervals.
The cause of Smith’s pain, Brighthaupt told both Rose and Eroshevich’s attorney, Adam Braun, was the death of her son, Daniel, and the recent Caesarian delivery her daughter, Dannielynn.
“She was a woman in pain,” Brighthaupt said.
The object of a preliminary hearing is to establish that there is at least enough evidence to warrant a trial. From a distance, with their format of examination and cross-examination, such hearings look like trials, but are somewhat less formal.
Prosecutors and defense attorneys are granted more latitude in their questioning and judges will also, typically, ask witnesses their own questions or attempt to clarify the questions of attorneys.
In this way the hearing most resembles a TV-show version of a criminal trial — especially when witnesses are permitted to offer extended commentaries of their own.
Still, Superior Court Judge Robert Perry would not allow the questioning to focus on some of the case’s more salacious aspects.
Perry in particular slapped down Rose’s insistence on establishing that Eroshevich was romantically involved with Smith; nor would Perry countenance much digging into an extramarital affair that Brighthaupt admitted to having had at the time of Smith’s death.
Instead, he refocused the questioning on Smith’s drug use.
Smith, Brighthaupt said, often resorted to ingesting the powerful sedative chloro hydrate — sometimes by “taking a swig” directly from the bottle or with a spoon — a very large spoon. Rose got the bodyguard to say the spoon was definitely bigger than a teaspoon.
Rose: Was this a mix-a-cake kind of spoon?
Brighthaupt: You could mix a cake with it.
Brighthaupt bolstered the D.A.’s contention that the three should stand trial by portraying them as reckless enablers who catered to their celebrity client’s appetite for self-destruction.
This picture became tragically vivid a few days before Smith’s death, when she was overcome by a 105-degree fever during her stay at the Hollywood, Florida, Hard Rock Hotel.
“Baby girl,” Brighthaupt claims he told Smith, “I’m about to call 911.” But neither the bodyguard nor anyone else in the hotel room did so, since Smith insisted she stay put because of her fear of being trailed by paparazzi.
After Braun tried to rehabilitate Eroshevich’s reputation by getting Brighthaupt to admit the doctor had attempted to wean Smith off prescription drugs, Stern’s lawyer, Steven Sadow, took out the wrecking ball to damage Brighthaupt’s reputation.
He got the bodyguard to admit he had sold his version of events to tabloid TV shows, and Sadow’s questioning suggested that Brighthaupt lashed out at Stern from an anger stemming from Stern’s request for the bodyguard to return a video camera that had belonged to Smith.
Sadow also got Brighthaupt to note that Stern regularly told Smith to stay away from her meds when she attempted to take them ahead of schedule.
Sadow is known as an aggressive Atlanta lawyer. “This is Sadow’s Hollywood Moment,” one court spectator whispered as the attorney strode to a podium to confront Brighthaupt.
If that is so, Sadow was somewhat thwarted by Judge Perry’s frequent “Cut!” directions.
Perry is a white-haired man who speaks in a folksy, Hal Holbrooky voice tinged with irritation. He repeatedly urged counsel for both sides to hurry up with their meandering, oblique lines of questioning to “cut to the chase.”
Every time Sadow began a long wind-up of a question, Perry would pull the rug from under him, reminding the Atlantan that this was only a preliminary hearing and not a trial.
“You can make this a six-month trial if you want,” Perry said of the future, “and you can be on TV every night on the courthouse steps.”
If the case goes to trial it will be kicked to Judge David Wesley a few doors down the hall. Wesley is a patient man who is just recovering from the marathon Anand Jon trial and post-trial motions.
For now, Brighthaupt is due back in court Friday morning for Rose’s redirect. Waiting in the wings today was Dannielynn’s father, Larry Birkhead, who appeared just long enough to be told to report as a witness tomorrow.
If Brighthaupt’s testimony provided some bumpy moments, seatbelts will definitely be required for Birkhead’s appearance.
FEATURED VIDEO (SPONSORED)
x
Looks like you're enjoying reading