Annette Bening’s role in “Captain Marvel” has been a mystery since she was cast in the movie — even if some reports referred to her as Carol Danvers’ mother. That secrecy continued last month in the upcoming blockbuster’s second trailer, in which Bening seemed to give a self-justification speech of sorts, but no one so much as whispered her character’s name.

But even so, we think that trailer contained a clue or two — and they point directly to a specificcharacter from Marvel Comics.

First, while obviously Bening isn’t playing Carol’s birth mother, the trailer positions Bening’s character as being essentially Captain Marvel’s creator — so in a sense, she could be Captain Marvel’s mom. But there’s no direct equivalent to that in the source material, because the comic book version of Carol Danvers (Brie Larson) got her powers by accident. But Marvel Studios never directly adapts comic book stories, so the lack of an equivalent comics character isn’t all that surprising.

Second, Bening is presented as something of a mentor or authority figure for Carol, which could mean she’s playing Mar-Vell, the original Captain Marvel in the comics. But that honestly doesn’t feel like a great fit, considering they appear to be having a climactic confrontation in the trailer.  Not to mention, fans have long assumed Jude Law is playing Mar-Vell, something Disney appeared to confirm recently.

But even though Marvel doesn’t do direct adaptations of storylines from the comics, it does tend to keep things surprisingly faithful when it comes to things like costumes and other aesthetic elements. And on that note, there is one thing from the trailer that feels unmistakably like a clue to identity of Bening’s character — her hair.

In case you can’t be bothered to scroll back up to the header image, here’s Annette Bening in “Captain Marvel”: 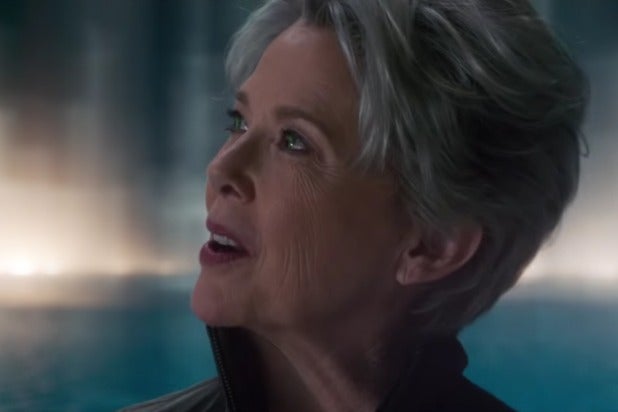 If you ask us, that cut evokes one specific Kree character: Phyla-Vell. 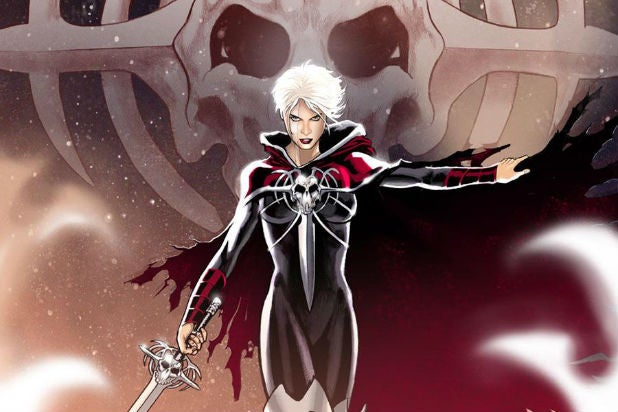 I mean, come on now.

So who the hell is Phyla-Vell? It’s nearly impossible to explain this character succinctly, but we’re going to try our best.

Phyla-Vell is rooted in the completely nuts cosmic side of the Marvel Universe. It starts with a character named Elysius, who had a thing with the original Captain Marvel, Mar-Vell. After Mar-Vell died of cancer (this was a whole thing), Elysius use Mar-Vell’s DNA to create a son named Genis-Vell, who later took the Captain Marvel name for himself and got involved in the most epic of epic Marvel scenarios — the regeneration of the entire universe. I’m not gonna go into the details there, but suffice to say it was weird and completely nuts like all the truly cosmic stuff in the Marvel Universe is.

After Genis-Vell helped recreate the universe, Elysius — who had died previously but was brought back in the new version of the universe — decided that the Genis-Vell thing had gone so well that she made herself a daughter as well. And that daughter was Phyla-Vell.

Phyla-Vell’s history is filled with wacky cosmic tales. She crossed paths with Thanos on a few occasions, she also carried the Captain Marvel mantle for a time, and even served as Quasar when she held his Quantum Bands. We shouldn’t expect her role in the “Captain Marvel” film to closely mirror any of Phyla-Vell’s comic book stories though, because that’s not how the MCU operates. But you can read a summary of her adventures on the Marvel site here.

Phyla-Vell rebuilding Carol Danvers in her own image — or that of Mar-Vell — would be a very MCU take on the character, though it’s tough to guess what all the implications of that are. Especially considering our assumption that whatever happens in “Captain Marvel” will somehow start Thanos off on his quest to end half of all life in the universe.

Phyla-Vell’s last appearance in a book, in “Guardians of the Galaxy” vol 2. issue 24 back in 2010, she was killed when Magus — the evil version of Adam Warlock — managed to revive the dead Thanos. The newly reborn Thanos immediately killed Phyla-Vell, who was shocked to see him.

Could something similar happen in “Captain Marvel”? We’ve speculated that the thrust of the plot will actually involve Carol, who believes she was born a Kree, trying to find out about her real past as a human — and then also discovering that the Kree are warring with the Skrulls for secret reasons that don’t seem all that altruistic. What if the war is actually to keep Thanos contained somehow? And maybe Carol, in trying to end the war, accidentally unleashes him?

Phyla-Vell’s inclusion would indicate at the very least that this movie is going to be a lot weirder than it looks so far. That wouldn’t be an overly surprising development either way, given the the situation that Carol is going to walk into in “Avengers 4” and the assumption that “Captain Marvel” will tie more overtly into the whole Thanos situation than “Ant-Man and the Wasp” did.

If Bening is playing Phyla-Vell, and Phyla-Vell being Captain Marvel’s creator, it would be exactly the sort of re-interpretation that the Marvel Cinematic Universe is so fond of. And the connection that the comic book version of Phyla-Vell has to Carol Danvers could say a lot about what kind of movie “Captain Marvel” is really going to be.

We also speculated that the powers of Quasar could be very important to how Captain Marvel is able to help retroactively save the universe in “Avengers: Endgame,” and Phyla-Vell could definitely bring those powers into play directly.

But really it’s tough to speculate too much because we simply are not going to find the answer for how this story ends in the comics — Kevin Feige and co. are too savvy for that. But the idea that Bening is playing Phyla-Vell would open up a lot of weird possibilities.