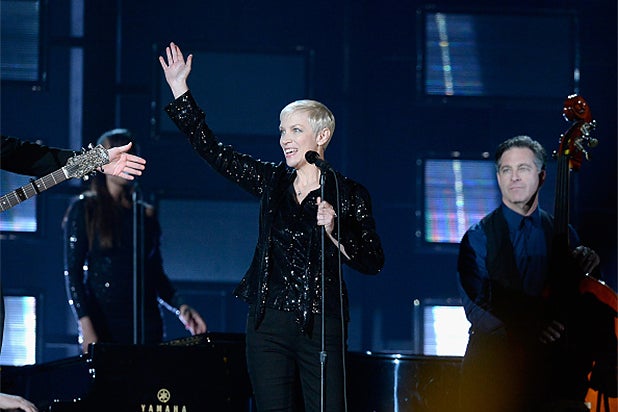 Was Annie Lennox contacted by the world’s worst and dumbest radio station employee? Or did she just expose a scam targeting desperate, unsigned music artists? Either way, someone needs to learn the difference between an unknown artist and a literal living legend.

On Thursday, the former Eurythmics singer posted to her Facebook page a strange, hilariously tone deaf form email she received offering her the chance to have her music put in rotation on a radio station with “over 100,000 unique listeners each month.” Lennox redacted the station’s call letters and a url, but left all other text in the letter intact.

“I came across your music on line [sic] and really like what I heard!,” said the letter writer, “Kylie,” who introduces herself as the station’s “New Music Coordinator.”

“I find artists who I think have potential and get them in rotation on our station. If you’d like, please send over the MP3 for your latest single,” “Kylie” continues. “I’ll forward it to Glenn our programming director here at [Redacted] to see if he’s interested in putting in rotation.”

Incredibly stupid? Yes. Dumb? Yes. Lennox is one of the most successful-ever musical artists. One would have to be a particularly incompetent “new music coordinator” not to know this. But is that what happened here?

The tone, formatting, typos, and requests made of the recipient are laughably unprofessional under the best circumstances. And the fact that the letter provides no last names for either “Kylie” or “Glenn” is especially suspicious.

But what’s really telling is that the bulk of the letter is devoted to asking the recipient to sign up for “an artist development firm that can also get you onto 150 radio stations worldwide.”

“Also what sort of support campaign do you have going on for your single (press, video, licensing, etc)? I only ask because we are connected to an artist development firm that can also get you onto 150 radio stations worldwide and provide support for press, video, retail and licensing.” The letter then continues with the hook: “The best part is, if they really like your music, they’ll cover all of the marketing expenses. You can check them out at [redacted]. Please let them know Kylie referred you and you should be in.”

We’re not saying it never happens, but few, if any, “artist development firms” or radio stations operate like this. At minimum, radio stations tend not to ask their employees to help their competitors find content.

One user in comments on Lennox’s post speculated that the radio station mentioned in the letter is KMIX Los Angeles, whose program director is Glenn Eisner. TheWrap has reached out to Eisner for comment, but has not yet received a reply.

TheWrap has also reached out to Annie Lennox’s representatives in an attempt to find out the redacted URL for the “artists development firm.”

Our guess: This is much more likely a phishing scheme aimed at artists, than it is the world’s least informed music industry employee embarrassing herself in front of one of the most famous and successful musicians of all time. Laugh at the latter all you want, but you should spend some time boning up on tips to recognize email scams, too. And would-be music legends out there, be careful — if it sounds too easy or too good to be true, it usually is.

Incidentally, Lennox has sold more than 80 million albums worldwide as a member of the Eurythmics and as a solo artist. Congratulations on all the success Annie – and thanks for (probably) shining a light on a scam targeting the people you’ve influenced.

Read the whole letter below: