After years of waiting, it finally happened: "The Bachelor" had a wedding this weekend. Jason Mesnick and Molly Malaney got married on Saturday in the Los Angeles area.

I have spent time with Jason and he is wonderful. When I first met him, I thought he was not a particularly nice guy because of what happened with Melissa Rycroft on his season.

After speaking with him over frozen yogurt, I got his side of the story.

I was so annoyed that he did not give me the happily-ever-after ending that I wanted as a viewer that I failed to see he got the fairy-tale ending that HE wanted, with Molly. 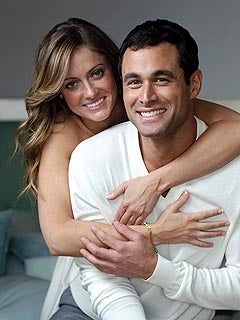 After we spent some time together, I realized the one who got screwed by his mistake was Molly. The show worked for her. She met her Prince Charming. But instead of having him pick her during the finale, making it a success story, she was painted as the bad one.

I love this couple, and I am thrilled that their story will air on ABC as a special on March 8.

The "Bachelor" experiment works! All the haters, and people who say it’s a ridiculous show, can watch March 8 and see two people who fell in love on television say "I do."

"The Bachelor" proves love can be found if you are looking for it. If you approach the hopes and dreams of finding your soulmate with intensity and sincere effort, you will find him or her.

Molly hung on, and good for her! That she was able to take Jason back, and didn’t let her ego stop her, is impressive.

While Jason took a bumpy path, he followed his heart to not only a bride, but a terrific woman to help raise his son.

I have renewed faith and belief in "The Bachelor." I will go into the finale tonight knowing that if it does not happen for Jake, that’s OK. It will perhaps happen for the next one. Unless it’s Ali, in which case I don’t care if it happens or not.

Mazel tov to the new Mr. and Mrs. Mesnick. May you have a happy and healthy life, and remember the long road you took to get to this glorious place. Love was found. Bravo for keeping the faith.