The day Anthony Carrigan learned that he was nominated for an Emmy for the second season of “Barry,” he was arriving for his first day on set for “Bill & Ted Face the Music,” where news about his honor had already spread, including to Alex Winter and Keanu Reeves. He was already humbled, to say the least, but he then put on a hulking, 40-pound robot suit in the summer heat of New Orleans.

Carrigan’s role as a futuristic robot sent back in time to assassinate Bill S. Preston, Esq. and Ted “Theodore” Logan is a sleek white, athletic, full body armor suit, with blue machinery bulging from his chest, shoulders and skull and his face encased in all white. Carrigan told TheWrap in an interview he donned not one, but two latex masks glued to his face in addition to the 40 pounds of costume he’s encased in.

In fact, the only way he could keep cool while wearing his suit was to dunk his hands up to his wrists in two separate ice buckets in order to cool down his blood flow. Carrigan praised the design as “brilliant” even as he admitted the “real discomfort” he had while wearing it, let alone trying to act in it, but he said it was all worth it to be able to star in “Bill & Ted Face the Music.”

“I was essentially in like a silicone oven, heating in my own juices,” Carrigan told TheWrap. “But honestly, it was a small price to pay for being part of something so special.”

Carrigan may have been riding high from his Emmy nomination when he made it to set, but he still had to audition for the villain role in the film, and he said he was so excited about learning he even got an audition that he actually had to pull over in his car to process the news.

It turns out he was a real fan of “Bill & Ted’s Excellent Adventure” and had been waiting just like everyone else for the Wyld Stallyns to finally get the band back together again. Though he wondered how a reunion film would even work more than two decades later. 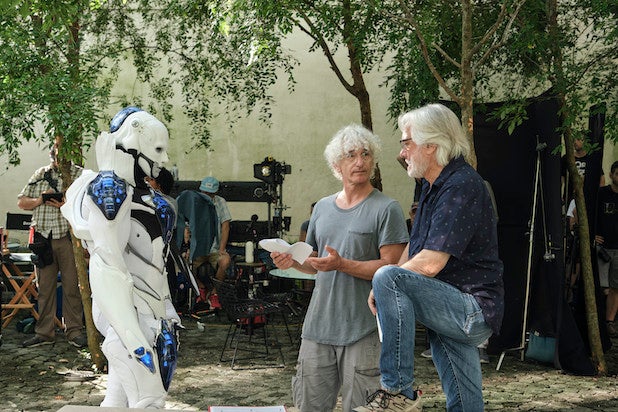 “How can you not love these guys? They’re so much fun. And they’re just really fun movies too,” Carrigan said. “Even before I read the script I was like, ‘What is this? How are they going to be able to come back to this after a long time.’ And I think it’s great that they leaned into the fact that Bill & Ted are much older now, and they’re being confronted with getting up there in age and having this pressure on delivering on something so monumental and feeling that stress. That’s a great take on the human condition, but through the lens of a fantastic franchise.”

Carrigan’s character often steals the show away from both Winter and Reeves, whose robotic villain who turns morose, insecure and sheepish when he bungles his assassination attempt. In one hilarious scene with William Sadler reprising his role as the Grim Reaper, Death has just given a trailer ready catch-phrase and shouted “Let’s rock!” Carrigan then does his best “Chris Farley Talk Show” impression and replies, “It was cool when you said, ‘Let’s rock’ because it made me want to rock.”

Carrigan said he got a blank slate with which to create his robot character, and he loved the opportunity to act alongside the “icons” that are Bill & Ted and be part of the larger message that their story provides.

“When Alex and Keanu say ‘Whoa’ in front of you, it’s hard to snap back into the scene and remember your lines,” he said. “The whole thing with Bill & Ted is, they’re in touch with something very wise. They have a great philosophy about life, and while they’re maybe kind of airheads, I don’t know, they’re able to put their finger on what’s important in life, you know? And I think that’s something we can all understand is their philosophy. All we are is dust in the wind.”

For Carrigan, this is his first of two film roles since his breakout year with “Barry,” the other being a drama alongside Kevin Hart called “Fatherhood” that’s due out next year. That film he says was an opportunity to strip away the more “cartoonish elements” of his NoHo Hank character and prove he can still play “more of a regular dude,” suggesting that his real breakout moment may still be to come.

“This time specifically that we’re in, where the pause button has been hit, we’re given this opportunity to take stock and see what’s important in life, and where we are, and I think, specifically, I’m excited to continue to bring characters to life that maybe provide some kind of cathartic experience for people,” Carrigan said. “I’m excited for what the future holds primarily because I have no idea what is in the future. Maybe in a similar way of how Bill and Ted think, I guess we’ll kind of see. I’ll go with the flow once it shows up.”

“Bill & Ted Face the Music” opens in theaters and on-demand on Friday.