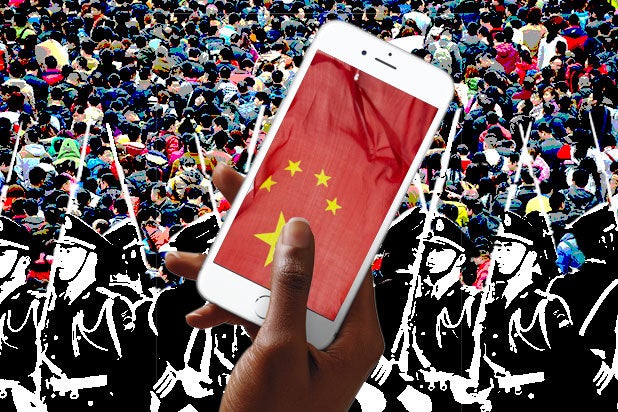 China may be the brightest spot in Apple’s business, but the country clouds its very public fight with the U.S. government over a mass murderer’s locked iPhone.

He’s also expected to discuss encryption, the security feature at the heart of the company’s battle against a Justice Department order to help unlock an iPhone used by one of the terrorists in December’s deadly mass shooting in San Bernardino, Calif.

But don’t expect him to say much about China.

Even though the world’s most populous country is a big deal for iPhone sales, Apple’s actions to enter the Chinese market — like conforming to China’s WiFi standards and placing data centers there — complicate its battle with law enforcement here.

Apple has said it must stand up to the U.S. government in the San Bernardino case or it will heighten the risk to privacy and safety of customers in authoritarian countries. But the U.S. has questioned whether Apple hasn’t already compromised some principles to protect its all-important Chinese sales.

How important are Chinese iPhones sales to Apple? iPhones are the cornerstone of Apple’s business, generating two-thirds of all its revenue last fiscal year, and the company is counting on China as the source of its greatest potential growth. In its last fiscal year, revenue in China rocketed 84 percent, while it grew just 17 percent in the U.S.

China’s magnitude for Apple grows when you look at the company’s prospects elsewhere. Outside China, consumers are tending to hold onto their iPhones longer, skipping the company’s yearly replacement cycles. As a result, Apple is forecasting its first sales decline in more than a decade during the current quarter.

But to reach that white-hot Chinese market, Apple made some choices that critics questioned for potentially forcing Apple to turn a blind eye to government snooping by Xi Jinping’s Communist regime.

Six years ago, Apple tweaked iPhones for Chinese sale to support the country’s homegrown WiFi standards, after earlier releases were crimped by their ability to connect to mobile networks only. Two years ago, Apple moved Chinese customers’ data to storage facilities inside the country operated by state-run company China Telecom, after state television characterized the iPhone as a national security risk.

Liz Maida, the CEO of cybersecurity company Uplevel Security who has worked with Chinese data centers, noted that neither move necessarily compromises data protection. But both add points along the chain that wrest away some of Apple’s control.

The Chinese WiFi standard, for example, is widely understood as a trade discrimination tactic, designed to protect the Chinese hardware-component makers that build the parts that run that standard. “But there are concerns that if you designed your own standard, you can build in your own security loopholes,” she said.

Apple declined to comment for this article beyond its previous statements on the subject.

The company has rejected the FBI and Justice Department’s claims its moves in China were intended as special accommodations. The data at the China Telecom centers is encrypted, just like the information on the San Bernardino shooter’s phone, so even though it is being stored at a government-run center, the Chinese government can’t simply peek into it.

“It is my understanding that Apple has never worked with any government agency from any country to create a ‘backdoor’ in any of our products or services,” Craig Federighi, Apple’s senior vice president of software engineering, declared in a court filing last week.

In another brief, Apple said it uses the same security protocols everywhere in the world and follows the same standards for responding to law enforcement requests, no matter the country.

In fact, Apple’s most recent transparency indicates the company is more accommodating to U.S. law enforcement requests than China’s. In the first half of 2015, Apple disclosed data for 81 percent of the 971 requests by U.S. authorities; Apple provided data in only 29 percent of China’s 24 requests.

But Apple’s fight against the U.S. government raises the stakes for its business in China, said Rob deBrauwere, a lawyer who helps head the digital media practice at law firm Pryor Cashman. Apple is fighting the U.S., where civil liberties are strong, partly to avert sliding down a slippery slope in countries like China.

“If the perception is Apple allows governments and other agencies to hack into people’s devices, because China’s an authoritarian state, people have an even lower expectation of privacy in general,” deBrauwere told TheWrap. “Any interference in that could be a significant factor in their decision to buy their devices.”