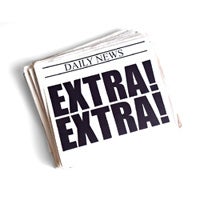 Maybe the death of the American newspaper has been greatly exaggerated. Or maybe it’s just going to take longer to bury than previously thought.

What’s more, according to the firm, Borrell & Associates, print ad revenue will climb 8.4 percent by 2014.

This seems to fly in the face of a recent report by PricewaterhouseCoopers, which doesn’t expect a newspaper advertising rebound until 2013.

Yet even Gordon Borrell, the firm’s CEO, admits that the predicted rebound is nothing close to a return to glory.

“True, it all equates to more of a dead-cat bounce than anything else,” Borrell wrote in a post introducing the forecast. “And even at 2014 levels of just under $30 billion, newspaper advertising won’t be anything near the $55 billion we saw earlier this decade. Nor will it ever return to that level.”

The Borrell crystal ball points to a future where newspapers — particularly in smaller markets — will succeed in serving a niche readership. ("Greatly distilled" is what they’re calling it.)

“While Borrell is right that newspapers are devising all kinds of new local sales strategies, few have been proven to be multi-million, sustainable winners,” Ken Doctor, a media consultant who blogs at ContentBridges.com, told me. “And there’s increasing competition in the local marketplace for online local dollars.”

But the New York Times executive editor Bill Keller isn’t sure that will be enough.

“I get invited to talk to editors and reporters, and I hate talking about the state of the business because my line boils down to newspapers have a future, just not necessarily your newspapers,” Keller told Crain’s in an article published over the weekend. “It’s kind of like being a motivational speaker in a hospice.”

Keller’s own paper, of course, profiled one of the papers cheating death — the Seattle Times — which, six months after its rival Post-Intelligencer folded, is beginning to turn a profit.

Doctor noted that print contributed 89 percent of overall revenues for daily newspaper companies in 2008. “I expect that number to come in at about 86 percent this year, given the 25 percent-plus print ad downturn.”

Some of the “recession-caused revenue loss” for print ad dollars will be recovered, Doctor said, but maybe only half of it.