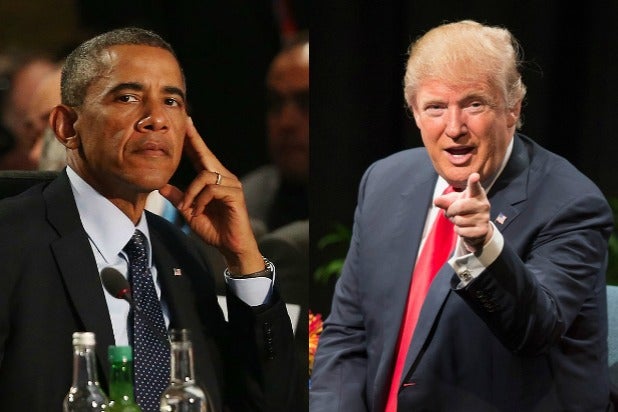 Donald Trump might be the only person in America who is happy about rising Obamacare premiums.

Trump’s opponent, Hillary Clinton, is running on the promise that she will build on Obama’s accomplishments, so it doesn’t hurt Trump if people are upset with Obama two weeks before Election Day.

The Department of Health and Human Services reported this week that premiums would rise significantly next year under Obamacare, with an average increase of 25 percent. Trump has seized on the news by tweeting links to stories about the price hikes for a program he has called a “disaster,” using the hashtag #Obamacarefail.

Trump has repeatedly promised to “repeal and replace” the Obama’s signature health care overhaul. Clinton has said she wants to keep the best of the program but make improvements. She said in the second presidential debate that she wants to “fix” Obamacare, because “premiums have gotten too high — copays, deductibles, prescription drug costs — and I have laid out a series of actions that we can take to try to get those costs down.”

Trump campaign manager Kellyanna Conway said Clinton is “in a tough spot” during an appearance on CNN’s “The Situation Room.”

“Most Americans don’t think Obamacare has been a great idea or that it’s really worked, and they keep seeing providers like Aetna and United Healthcare pulling out of the state exchanges and claiming billions of dollars in losses,” Conway told Wolf Blitzer.

Also Read: Why Trump.Org Says 'Vote No' to Donald Trump

“It’s news, but it’s not really shocking, right? The premium increases are bigger than a lot of people have seen, but the subsidies are also rising to match that. For most people who are buying their insurance on the exchange, their out-of-pocket cost for healthcare isn’t going to change that much,” Geldner said.

Geldner also argues that Republicans haven’t offered a viable alternative to Obamacare. (Trump’s alternative is described on his website.)

“They’re sort of still living in the let’s take our ball and go home, burn the whole thing down mentality,” Geldner said. “They just want to go back to the days where pre-existing conditions weren’t covered and people over 18 can’t be on their parents healthcare.”

Obamacare open enrollment starts November 1 and Geldner isn’t sure if voters will even realize their premiums are going up before Election Day.

Also Read: If Arnold Schwarzenegger Was Born in the USA, He 'Would've Run' for President This Year

“In all honesty, I’m not sure that enough people are going to go in and check how much their premium is going to cost next year before the eighth,” he said.

But a quick glance at Twitter shows that plenty of people are aware of the rising premiums — or at least, plenty of Trump supporters:

The "Affordable Care Act" isn't affordable. I agree w/ Bill Clinton: it's the craziest thing ever. Repeal and Replace!#ObamacareFail pic.twitter.com/gUJrgdcNCe

Hillary says she'll keep Obamacare! I can't afford it anymore especially after a HUGE increase in my area! TRUMP HELP ME! #ObamacareFail pic.twitter.com/6DcGr72u03

#ObamacareFail Our dad used to employ over 100 people before Obamacare. Had to lay off over HALF to afford to stay OPEN after it passed.

@POTUS Thanks to your brilliant HC plan my premiums doubled! Hope you sleep well knowing you are killing the middle class!#ObamacareFail pic.twitter.com/sgklZbxqgL

Millions of people now have healthcare!

(Small print: That they can't afford to use.)

Obama said Obamacare was like a "starter home," no I think its actually more like an old RV that get's 3 miles to the gallon. #ObamacareFail

Wow seeing even more people with doctors that aren't covered by #Obamacare . OC doesnt pay their bills tho #obamacarefail #healthinsuramce

Why isn't Hillary Clinton Telling Coconut Creek how her BFF Raised #ObamacareFail by 22%
I'll tell you Why, She Won't Tell the Truth EVER

Obamacare Premiums, already ridiculous, are about to increase 20+%.

Yeah, vote for THAT.

Remember when "Obamacare" was called The Affordable Care Act. Well, now its too expensive to insure your family. #ObamacareFail #Change pic.twitter.com/aO8fuZFOmu

@CNN but wait! 2 years ago Nacy Pelosi said it's affordable. 13 times in less than 1 and half minutes. https://t.co/tJ8ojTVLA0 #Obamacare pic.twitter.com/HXeisNkZrf