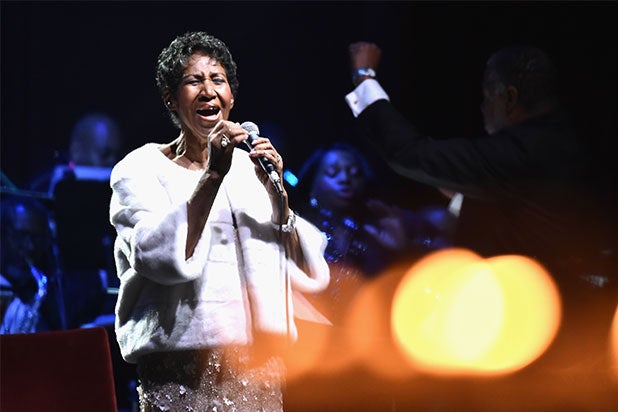 Aretha Franklin is “seriously ill,” according to the Associated Press.

A person with direct knowledge of Franklin’s condition spoke to the outlet on the condition of anonymity, providing no further information. A spokesperson for Franklin has not yet responded to TheWrap’s request for comment.

According to WDIV Local 4 in Detroit, Franklin’s hometown, Franklin is “gravely ill.” Evrod Cassimy, WDIV Morning Anchor and a “good friend” of Franklin’s, tweeted Monday that he spoke to her family members this morning and that Franklin is asking “for your prayers at this time.”

Later, he tweeted, “Just got a chance to speak to Aretha Franklin. She is resting and surrounded by close friends and family.”

BREAKING NEWS: I am so saddened to report that the Queen of Soul and my good friend, Aretha Franklin is gravely ill. I spoke with her family members this morning. She is asking for your prayers at this time. I’ll have more details as I’m allowed to release.

Just got a chance to speak to Aretha Franklin. She is resting and surrounded by close friends and family. More details ahead on Local 4 News at 12pm. #ArethaFranklin #aretha

Veteran journalist Roland S. Martin also confirmed the news, writing, “Folks, I’ve known for several months. The Queen is surrounded by loved ones. That’s all I will say for now. Please keep her, the family and her longtime support staff in your prayers.”

Many of you are asking me to confirm the health status of @ArethaFranklin. Folks, I’ve known for several months. The Queen is surrounded by loved ones. That’s all I will say for now. Please keep her, the family and her longtime support staff in your prayers. pic.twitter.com/F6nMjHQjlP

Franklin, who has long battled diabetes and other physical ailments, announced in February 2017 that she planned to give up touring. “I am retiring this year,” Franklin told WDIV Local 4 in Detroit. “I will be recording, but this will be my last year in concert. This is it.”

During her career, Franklin won 18 Grammys, including a lifetime achievement award in 1994. She was also the first woman to be inducted into the Rock and Roll Hall of Fame.

Born in 1942 in Tennessee to an itinerant preacher and his wife, Franklin moved with her family to Detroit when she was 5. Before long, she began singing in the gospel choir of the city’s New Bethel Baptist Church where her father was pastor — and also taught herself to play piano by ear.

Her biggest hits include “Respect,” “Think,” “I Never Loved a Man (The Way I loved You),” “I Say a Little Prayer,” “Baby I Love You” and “Ain’t No Way.” In 2009, she memorably performed “My Country Tis of Thee” at the first inauguration of President Barack Obama — and won as much acclaim for her elaborate hat as for her vocal performance.