Hollywood hasn’t had a real strongman since Michael Ovitz built up the Creative Artists Agency in the 1980s and called the shots from his sleek I.M. Pei-designed headquarters in Beverly Hills.

There’s been such a long gap since he took a fatal step by accepting the No. 2 job at Disney in 1995 that a person had to wonder whether nature really did abhor this particular vacuum. 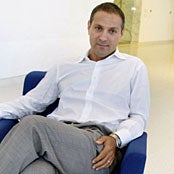 But in the past few weeks, agent Ari Emanuel is looking to some like a contender. His agency, Endeavor, snapped up the far larger William Morris Agency, then, with the speed of what was lurking in the waters in Jaws, dispatched top man Jim Wiatt to that nether region where Ovitz now resides. Can you hear that scary music? Hollywood certainly does.

“He pulled a real coup,” says one of the town’s more successful producers. “He got the William Morris Agency to pay his agency top dollar and then took it over and fired the guy who made the deal… It is the Hollywood equivalent of the Six-Day War.” The lopsidedness of the deal has been glaring as dozens of William Morris agents have been let go while Endeavor remains largely untouched.

The question now is whether the 48-year-old Emanuel has the opportunity and the disposition to build himself up into a modern-day Ovitz. In the late 1980s, Ovitz consolidated power at CAA by controlling many of the biggest stars and much of the best material. He had so much clout that he could force a studio to cast a star that it didn’t want to hire. (Example: Universal reluctantly paid millions of dollars to put Bill Murray in the 1993 film "Mad Dog and Glory.")

Since Ovitz’s fall, his former underlings at CAA have built a machine that continues to dominate. Replicating that achievement may no longer be possible. “Ari doesn’t have the dominoes,” says a producer who has known him for many years. “The nature of the world has changed.”

And stars have lost a lot of their shine, which robs agents of leverage. In fact, one fact that should not be obscured is that Endeavor’s merger with William Morris arose from need: Endeavor was too reliant on film and television, while William Morris brought strong publishing and music departments.

But a top network executive says a strong-willed person like Emanuel might be able to wield disproportionate clout. “You can still be a strongman in this business because it’s all smoke and mirrors,” he says. “Somebody who creates this perception of himself can be effective.”

Read more at the Daily Beast