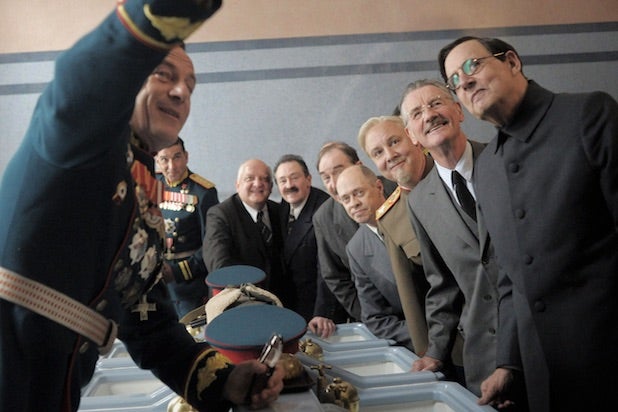 "The Death of Stalin" /IFC

The film, which stars Jeffrey Tambor, Steve Buscemi, Michael Palin and Andrea Riseborough and is set in the days around the Soviet dictator’s death in 1953, will be joined by a lineup of 11 other films, most from celebrated international auteurs.

Those films include Michael Pearce’s “Beast,” starring Johnny Flynn; Mike White’s “Brad’s Status,” which stars Ben Stiller and Jenna Fischer and is the only American film in the section; Clio Barnard’s “Dark River,” with Ruth Wilson and Sean Bean; Nabil Ayouch’s “Razzia,” from the French-Moroccan director of “Mektoub” and “Whatever Lola Wants”; and Warwick Thornton’s “Sweet Country,” a period western starring Sam Neill and Bryan Brown that will close the Platform section.

“Platform is the place to look for the distinct stamp of today’s most interesting directors as they establish their reputations,” TIFF Artistic Director Cameron Bailey said in a statement. The dozen films in the section will be eligible for a $25,000 prize from a jury consisting of directors Chen Kaige (“Farewell, My Concubine”), Malgorzata Szumowska (“33 Scenes From Life”) and Wim Wenders (“Paris, Texas”).

The Toronto International Film Festival will kick off on September 7 with the world premiere of “Borg/McEnroe,” and will run through September 17. Other films booked include George Clooney’s “Suburbicon,” Alexander Payne’s “Downsizing,” Guillermo del Toro’s “The Shape of Water” and Morgan Spurlock’s “Super-Size Me 2: Holy Chicken!”