Six months or so ago, I wrote a column about my friend Alana Stewart’s party for her book “My Journey With Farrah: A Story of Life, Love and Friendship,” which you may remember was a follow-on to her top-rated TV documentary about her best friend, Farrah Fawcett.

In it, I quoted Raquel Welch.
Well, last week it was Raquel’s turn, with Alana co-hosting a book signing and meet-and-greet for Raquel’s new book, “Beyond the Cleavage” (Weinstein Books, $26.95) at Oscar de la Renta’s boutique on Melrose Place. (Yes, the same two-or-three block street the TV show is set on!!!) 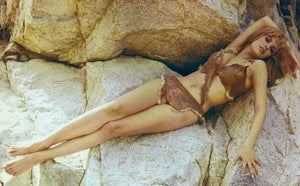 I’d like to say right here is that, as the title implies, I’m in no way trying to replace Army Archerd as chronicler of Tinsel Town nightlife. And, in fact, with Army now gone, I was happy to see his old competitor George Christy there.
He reminded me that, despite the problems at the Hollywood Reporter, he was still actively covering the scene in his column for the Beverly Hills Courier.
But Raquel has been an icon for so long– years before I even thought of coming here — that I felt someone had to take note of her continuing presence and, yes, since her book debuted at #1 on the New York Times bestseller list, continuing success.
Everyone remembers, of course, her unforgettable debut in the fur bikini in 1966’s “One Million Years B.C.” Or, well, maybe most of us have forgotten the movie (if we ever saw it), but who could forget that poster! Even if you weren’t alive then, you remember seeing it reproduced ad infinitum in almost every book or memoir of ‘60s Hollywood. 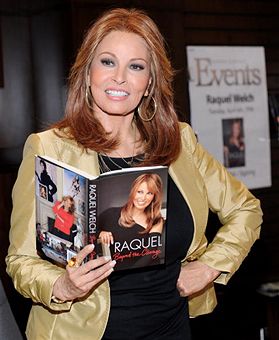 Raquel subsequently went on to prove herself more than just “the body” in later films like legendary writer (and former Senate candidate) Gore Vidal’s “Myra Breckenridge” (1970) and her own passion project, 1972’s “Kansas City Bomber,” in which she played, well, a woman probably a lot like herself — both stunningly beautiful but tough, a single, working mom trying to find her way in a man’s world.
Given that was the era of women’s lib, while hardly a failure, I was surprised that “Bomber” didn’t achieve the success it deserved, the way Bob Rafaelson’s similar “Five Easy Pieces,” say, did.
The nice thing about last week’s event is that it is clear that, even at 69, Hollywood hasn’t forgotten her, either. The guest list was a “who’s who” of her contemporaries in town, from such doyennes as Barbara Davis, widow of former Fox head (and creator of the Fox Network), Marvin Davis, to slightly younger (but equally still beautiful) contemporaries like Jacqueline Bisset to next generation stars like Alana’s daughter Kimberly and her buddies.
But clearly, beyond Raquel, the focus was on the girls she undoubtedly inspired. As one young filmmaker pointed out, between ‘60s Raquel, Bisset (remembered for her “wet” T-shirt performance in Peter Guber’s 1978 “The Deep”), Sports Illustrated’s ‘80s’ cover model Cheryl Tiegs, “my entire youth just passed before my eyes.”
In truth, though, the surprise of the night was actually how wide and interesting Raquel’s circle of friends has become. For instance, I spent a good portion of the evening chatting with everyone from Vidal himself, who came in from the south of France for the party, to self-realization guru Marianne Williamson, who was nothing like I expected.
In fact, we spent most of the time talking not about her books or philosophy but rather about our kids, both of whom are pursuing foreign educations–her 19-year-old daughter attending Kings College, London, and my 18-year-old son, off looking at the University of Toronto this week.
It just goes to show that, as Raquel makes clear in “Beyond the Cleavage,” you can’t judge books — or women! — by their covers.
BIO Peter McAlevey