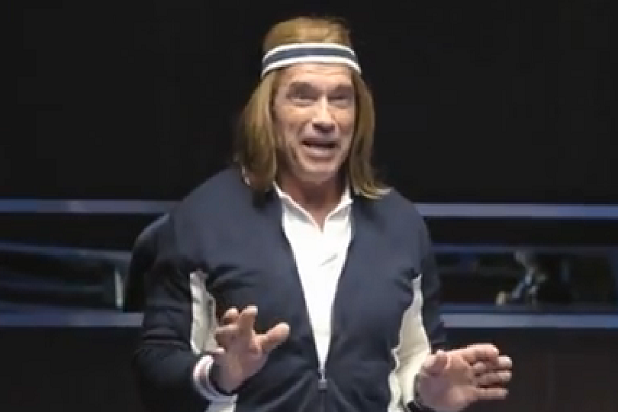 Bud Light cranked up the star power for its Super Bowl commercial, enlisting Don Cheadle, Minka Kelly and Arnold Schwarzenegger to create the night of a lifetime.

The commercial starts out with regular guy Ian Rapoport sitting in a bar, when a woman clutching a Bud Light approaches him.

“If I give this to you, are you up for whatever’s next?” the woman asks.

From there, our hero embarks on a wild night: Getting down at a bachelorette party in a Hummer limo where comedian Reggie Watts is the DJ. Running into “House of Lies” star Don Cheadle and an Alpaca in an elevator. Hitting up a party populated entirely by female twins.

And, as a capper, facing off against Arnold Schwarzenegger — who’s decked out in a wig and headband — for a game of ping pong. (Or, as the “Terminator” star calls it, “tiny tennis.”)

Funny, but whenever we drink Bud Light, the only thing we get is a sneaking suspicion that there’s not actually any alcohol in there.