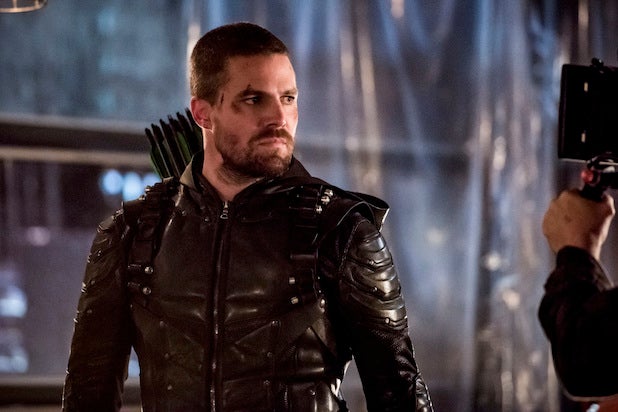 The eighth and final season of “Arrow” will not only close out the flagship “Arrowverse” series, but it will also do the heavy lifting of setting up the CW’s upcoming “Crisis on Infinite Earths” crossover.

“Everything relates to what’s going to happen in our crossover episode, which we’ve never done before,” “Arrow” showrunner Beth Schwartz told Entertainment Weekly. It’s been heavily teased that Stephen Amell’s title character would die in the crossover, with the announcement that the eighth season would be its last and air ahead of the big event only adding further fuel to that fire.

Then, in the Season 7 finale, The Monitor (LaMonica Garrett) basically tells Oliver (Amell) that will happen. “Oliver [is told] he’s going to die, so each episode in the run-up to ‘Crisis’ has Oliver dealing with the various stages of grief that come with that discovery,” executive producer Marc Guggenheim said. “Because he’s a superhero with no superpowers, I always felt he should die — but he may also not die,” Amell added.

In the abbreviated season, Oliver and The Monitor will travel the globe in an attempt to stop a cataclysmic event from destroying the multiverse, which will reach its crescendo during the big crossover. “[We’re] taking the show on the road, really getting away from Star City,” Guggenheim said.

The “Crisis on Infinite Earths” crossover, one of DC Comics most famous storylines, will be The CW’s biggest. It will span five hours, all five “Arrowverse” shows, including newcomer “Batwoman,” and carry over the midseason break.

Created by Marv Wolfman and George Perez, “Crisis on Infinite Earths” was a best-selling 12-issue series running from 1985 to 1986 that replaced the DC multiverse, which since 1961’s “The Flash of Two Worlds,” had explained the company’s varying and contradictory continuities, with a single streamlined universe and a complete reboot of most DC characters. It was a critical hit and a best seller for DC and is credited with popularizing the idea of large-scale crossovers in comics.

In the series, The Monitor’s evil counterpart, The Anti-Monitor, attempts to destroy all of the different universes with the goal of becoming the sole ruler of whatever is left. He’s eventually foiled but at a staggering cost: the surviving five universes are merged into one, and a huge number of classic DC characters were killed off, seemingly for good… including both Supergirl and Barry Allen.