Swarms and swarms of such happy moviegoers left the Beekman Theater one afternoon in 1981, a golden New York weekday that made you look around and think, “Does anyone in this city have a job?”

Then again, the title character of the movie was a pathologically work-averse New Yorker named Arthur and the one negative comment at the exits was a killer Upper East Side nitpick: “They blew it. The Rolls Royce at the end  had a Z license plate, so you know it was a rental. Otherwise, it was a perfect movie.” 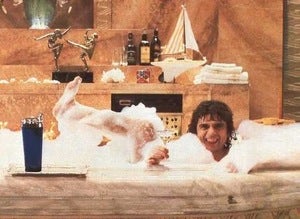 Peter Mehlman started his career as a writer for the Washington Post, then wrote for and produced the TV series, "SportsBeat" with Howard Cosell. In 1989, he moved to Los Angeles and soon became a writer and later executive producer for "Seinfeld" -- most famous for his "Yada Yada" episode. In recent years, he has continued creating TV shows, writing screenplays and humor pieces for NPR, Esquire, The New York Times, Washington Post and L.A. Times while also appearing on-camera for TNT Sports and his own web program "Pete Mehlman’s Narrow World of Sports."
x
Looks like you're enjoying reading