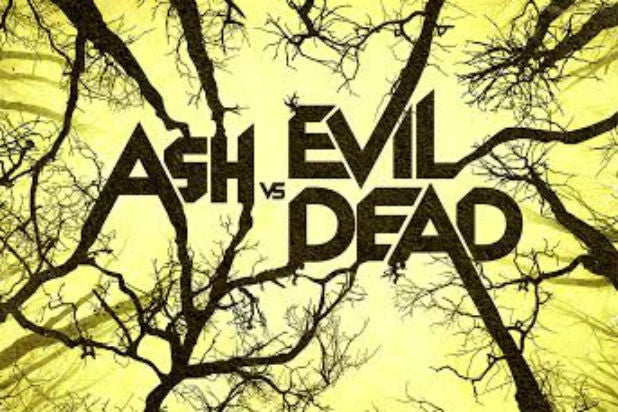 Starz released a poster and a teaser trailer for their upcoming “Ash Vs. Evil Dead” series on Thursday.

The series picks up where the “Evil Dead” films left off, with Ash (Bruce Campbell) the stock boy, aging lothario and chainsaw-handed monster hunter who has spent the last 30 years avoiding responsibility, maturity and the terrors of the Evil Dead.

When a Deadite plague threatens to destroy all of mankind, Ash is finally forced to face his demons –personal and literal. Destiny, it turns out, has no plans to release the unlikely hero from its “Evil” grip.

Raimi is directing the first episode of “Ash Vs. Evil Dead” that he wrote with Ivan Raimi (“Darkman,” “Army of Darkness,” “Drag Me to Hell”), Craig DiGregorio (“Workaholics,” “Chuck”) and Tom Spezialy (“Chuck,” “Reaper,” “Desperate Housewives”).

See the trailer here or below.