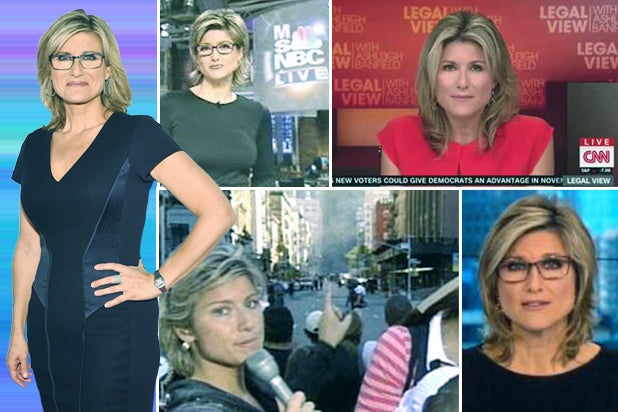 When Ashleigh Banfield takes over Nancy Grace’s coveted 8 p.m. hour on HLN on Monday, the move will not only mark her return to prime-time after more than a decade but also a moment of vindication in a career defined by extreme highs and lows.

“There was a pretty painful period in my career when it was hard to understand why there were such prodigious peaks and some cavernous valleys,” Banfield told TheWrap. “I was mystified at how one moment you’re on the cover of Vogue magazine and the next moment no one will return your calls.”

The rise was fast; the fall, painful.

“They didn’t cancel Ashleigh’s show; they canceled Ashleigh,” said one of Banfield’s producers at the time, who asked not to be named.

Banfield was an up-and-coming anchor at MSNBC when, on the morning of Sept. 11, 2001, she became a household name almost overnight.

She was getting ready to head to the network’s Secaucus, N.J., studio when the first plane hit the North Tower of the World Trade Center. Amid the chaos, Banfield rushed to downtown Manhattan to report on the scene. She was in the middle of a live interview with a woman holding a newborn when 7 World Trade Center, a 47-floor building, collapsed behind her.

Banfield remained cool, even as a plume of smoke and debris came barreling toward her. Something about her reporting that day — a combination of fearlessness and humanity —  seemed to strike a chord with viewers.

It didn’t take long for MSNBC brass to realize they had a star on their hands. Banfield was quickly promoted and sent around the world as the anchor of a new roving series, “A Region in Conflict.” She spent much of the next year criss-crossing the Middle East, earning a reputation as a dogged reporter with a knack for war zones.

Banfield hosted the show from a different location each week reporting from Pakistan, Afghanistan, Iran, Iraq, Israel, Jordan, Lebanon, Syria and Saudi Arabia. It was a daring concept but Banfield’s show soon took off, becoming the network’s top-rated program.

“When I think about that time I remember being struck by how much she was able to do with so few resources,” former “RIC” producer Brian Balthazar told TheWrap. “All she had was a yellow pad and a skeleton crew that included one producer and one cameraman. People didn’t realize she basically ad-libbed an hour-long show every night. It was nothing short of extraordinary.”

The show further cemented Banfield as a force within the industry. Known simply as “the girl with the glasses,” thanks to her signature Clark Kent-style spectacles, she was hailed as a new kind of journalist, so popular Vogue magazine called her “the anchor who is changing the way we watch the news.”

But her swift rise to the top of broadcast journalism seemed to have ruffled feathers within the industry, including her own colleagues at NBC News. Even as she was drawing nearly a million viewers a night, a coup for the then-fledgling network, some producers and executives questioned whether she was ready for such a plum prime-time gig.

“Early in my network career, critics accused me of wearing fake lenses so I could wear glasses to look smarter,” she said laughing. “On one occasion, my ophthalmologist called in live to a radio show to prove to the host that I, in fact, had a pretty severe prescription.”

Roger Ailes, the former Fox News Channel boss who recently stepped down amid sexual misconduct allegations, went as far as calling her a “news actress” in a 2002 interview with the New York Times.

Before long, Banfield was fielding broadside attacks aimed at her from the executive suites of NBC’s 30 Rock.

“I remember hearing rumors in a meeting that was held by [Then “Nightly News” anchor] Tom Brokaw of some of the younger producers griping that I was a joke. Brokaw chastised them saying, ‘She’s in a war zone reporting every single day in a dangerous place and you’re having sushi and a cappuccino.’ And I think the description was [that] the room fell silent.”

In October 2002, MSNBC canceled Banfield’s show (which, by then, had been renamed “On Location With Ashleigh Banfield”), citing a drop in ratings.

Banfield was taken off the air at the height of the the D.C. sniper attacks, a series of shootings that took place over three weeks in October 2002. But her team notes that it continued working on the story — essentially producing the exact same show — just with John Seigenthaler as anchor.

With more than a year left on her contract, Banfield pleaded to be released. But then-president of NBC News Neal Shapiro refused. Banfield was instead moved to NBC News where she filed stories for “Nightly News” and “Today.”

By the time her contract was up, Banfield had been away from the anchor desk for too long. The networks who had aggressively courted her just months earlier, seemed to have moved on.

Banfield did herself no favors with a speech at Kansas State University a couple of weeks after the fall of Baghdad in April 2003. She argued that TV networks had failed to show all of the Iraq war’s horrors and questioned the “embed” process, in which reporters were assigned to specific units, a system devised by the Bush administration that has since been questioned by others.

NBC quickly released a statement denouncing Banfield’s comment: “Ms. Banfield does not speak for NBC News. We are deeply disappointed and troubled by her remarks, and will review her comments with her.”

“It was a time when the country was extremely on edge, fearful about other attacks and in many ways blindly trusting in government,” one of her former producers, Kim McCabe, told TheWrap. “And questions weren’t asked often times, not only by journalists but people in our own government. It was unfortunate. Whatever your opinion on the war is, I think there were a lot of lessons to be learned about that blind following and trust in government during such important times.”

Shapiro, who is now CEO of PBS’ WNET in New York, did not respond to TheWrap’s request for comment. But in 2003, he told the New York Times that “Banfield’s reduced visibility was solely because of her new role as an NBC News correspondent.”

Shapiro then dealt one final blow for good measure. “It’s one thing to be a rising star in cable,” Shapiro said. ”The broadcast network is a different platform with different skills required.”

Banfield says there was no mistaking it, she was being benched.

“For 10 months I had to report to work every day and ask where I could sit,” Banfield told the New Canaan-Darien Magazine in January 2009. “If somebody was away I could use their desk. Eventually, after 10 months of this, I was given an office that was a tape closet. They cleared the tapes out and put a desk and a TV in there, and a computer and phone. It was pretty blatant. The message was crystal clear.”

But those who worked with her refute that narrative.

“She had high standards, sure,” McCabe said. “But she worked harder than anyone and never asked anyone for anything she wasn’t doing herself.”

Others on her staff believe there was an inherent level of sexism in those accusations.

“Even the whole ‘girl with the glasses’ thing was sexist. First, she’s not a girl,” Balthazar said. “And second, you don’t see people calling Keith Olbermann ‘the boy with the glasses.'”

Balthazar said he was struck by the fact that Banfield would stick around after her live shows to help technicians pack up the cables and equipment even when the show taped in the middle of the night local time.

“I never experienced any difficulty working for her,” he said.

Banfield went through a tough patch in the first couple of years following her MSNBC stint. She eventually took some legal courses and reinvented herself as a legal analyst for Court TV. Soon she was co-hosting a trial coverage show, “Banfield & Ford: Courtside” with Jack Ford. In 2009, Banfield took over as host of the truTV series “Open Court.”

Three years later, Banfield was back on a major cable news network, co-anchoring CNN’s morning show, “Early Start,” along with with Zoraida Sambolin. Six months after that, she was promoted to anchor of “CNN Newsroom,” replacing host Kyra Phillips. In 2013, CNN re-branded the show as “Legal View With Ashleigh Banfield.”

In June, Banfield reclaimed the spotlight by dedicating almost half of her show — 23 minutes of airtime — to reading an emotional letter written by the victim of a sexual assault at the sentencing hearing. The attacker, a Stanford University student, received a light six-month sentence.

It was bold, risky and a very Banfield thing to do.

“CNN is often an easy target for punchlines,” GQ wrote. “What with their lost-plane obsession and extremely loose definition of ‘Breaking News.’ But it’s important to give them credit when they do things right, and here they did something right.”

When Nancy Grace announced she was leaving her eponymous HLN show after 12 years, the network tapped Banfield to replace her. The symbolism is not lost on her.

“This is a really big deal, moving back to prime time,” she said. “It’s almost surreal.”

Ironically, the name of her new show could easily serve as title of her autobiography: “Primetime Justice.”

But for those who still remember her as the bespectacled blonde reporting from the world’s most dangerous places, there will be at least one thing missing. Turns out, “the girl with the glasses” couldn’t wait to get rid of them.

“What people don’t know is how much I hated them,” she said. “Especially the way they pinched the sides of my nose.”

She would have gotten rid of them sooner but she wasn’t a candidate for lasik surgery.  As soon as a fitting procedure became available, she booked the appointment…  and, well, never looked back.

Asked whether she has any regrets now that life seems to be back on the right track, Banfield said,”Millions. If you don’t have any regrets you’re doing something wrong.”

Editor’s note: The writer of this article, Itay Hod, was an associate producer for both “Region in Conflict” and “Ashleigh Banfield on Location.”