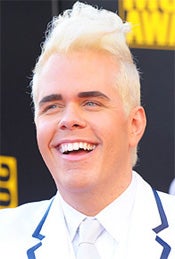 Gawker has the letter of intent. A spokesperson for Avid Life told the site that the company has partnered with a pair of gossip bloggers — Zack Talor and Nik Richie, who runs TheDirty.com — to solidify the offer. (Avid appears willing to spend the cash. As Hamilton Nolan points out, the company paid $20 million for HotorNot.com two years ago.)

I e-mailed Perez for a response, but have yet to hear back.

To me, though, this smells like a full-on publicity stunt. Ashley Madison lives off fumes of publicity it gets through advertising on Howard Stern’s satellite radio show — it recently sponsored Stern’s "Tiger Woods Mistress Beauty Pageant," paying the winner, Jamie Jungers, $75,000.

And Hilton said in his recent book, "True Bloggywood Stories," he’d only consider selling his site for $500 million — and even then he’d retain ownership:

"I would sell half of my site for $500 million. I would maintain 51% ownership and do whatever I want with it."

Perez Hilton: Anderson Cooper Should Come Out of the Closet (Video)