Amid a surge in anti-Asian violence recorded across the country, Twitter has joined actors like Daniel Dae Kim and Henry Golding to call attention to recent crimes against elderly Asian people and have urged others to not overlook the violence.

On Tuesday, Twitter Together — a self-described “community of advocates, allies, champions, and Tweeps” based at the social media giant — noted the recent increase in anti-Asian violence and called on others to be allies to the Asian community. “We’ve seen an increase in attacks against Asian communities and individuals around the world. It’s important to know that this isn’t new; throughout history, Asians have experienced violence and exclusion. However, their diverse lived experiences have largely been overlooked,” the account posted. “We also cannot forget historical efforts to create rifts — often perpetuated by the model minority myth — between Asian and Black communities. The time for allyship is long-overdue. The time for allyship is now.”

Actors Daniel Dae Kim and Daniel Wu offered a $25,000 reward for information that could lead to arrests following the brutal Jan. 30 attack of 84-year-old Thailand native Vicha Ratanapakdeein, who died two days after he was knocked to the ground while on his morning walk in San Francisco, and a 91-year-old man who was shoved from behind onto the sidewalk while walking in Oakland’s Chinatown.

“We must do more to help the literally thousands of Americans who have suffered at the hands of this absolutely senseless violence,” Kim and Wu wrote in their shared post, which included surveillance video of the Oakland attack. 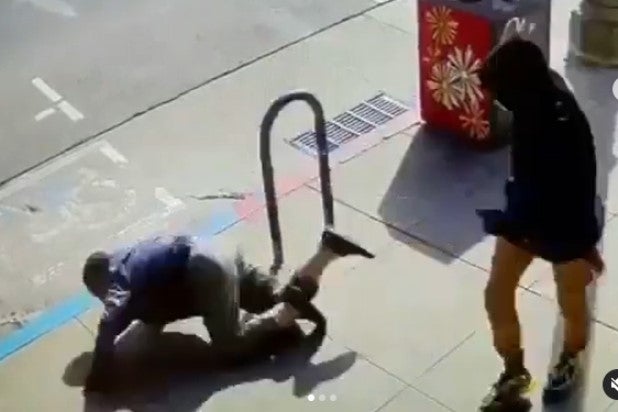 A 91-year-old man was shoved without provocation in Oakland (Photo: Oakland Police Department)

Two “Crazy Rich Asians” stars also chimed in. “I hope that these people understand that you will not get away with racially motivated, unprovoked attacks on the asian community. Justice will be served,” Henry Golding tweeted. Co-star Gemma Chan, who also noted that anti-Asian attacks have increased 300% in her native U.K., added, “The community is in pain from these completely unprovoked attacks but the crimes are too often ignored and underreported. Imagine if this was your father or grandfather?”

“The Man In the High Castle” actor Joel de la Fuente echoed Chan, tweeting, “Violence against Asian Americans has historically been underreported. The recent attacks on defenseless, elderly people is horrific and needs to stop.”

“We are human and we deserve equal dignity,” civil rights activist Amanda Nguyen, who has documented other incidents of violence against Asians and has called for more reporting on the attacks, said on MSNBC with Kim and Wu last Sunday. “Quite frankly, it is a betrayal of the very fundamental tenet of what it means to be an American if people stay silent in the face of hate.”

Yahya Muslim, 28, was arrested on multiple assault charges connected to the Oakland attack as well as at least two other assaults against Asian seniors, according to Oakland police. Alameda County District Attorney Nancy O’Malley is investigating whether Muslim’s attacks were racially motivated, which could add a hate crime to his charges. (Muslim has not entered a plea in the case.) O’Malley also announced the creation of a special response unit focused on anti-Asian crimes.

Bay-area TV reporter Dione Lim has also chronicled a string of other crimes targeting Asians in the region, including personal and business robberies (at least 20 in Oakland’s Chinatown alone) and a delivery driver’s car stolen with his two young children inside.

Daniel Dae Kim, former star of “Lost” and “Hawaii 5-0,” noted the challenges for older Asian Americans. “It’s been particularly difficult for our elderly community because not only are they affected by underlying conditions that would affect their health and make them scared to go out and interact with other people. Now, they’re subjected to being fearful to walk outside to be attacked,” he told MSNBC. “These are ways in which it just makes our community fearful to interact, to be outside, and it actually silences the community.”

The incidents are not just confined to the Bay Area. Last Wednesday, a 61-year-old Filipino man in New York City was attacked with a box cutter and slashed in the face during his morning commute on the L train. That same day, a 64-year-old Vietnamese woman in San Jose, California was assaulted and robbed as she was heading back to her car from the bank.

Stop AAPI Hate, an Asian American Pacific Islander reporting center launched at the start of the coronavirus pandemic, recorded over 2,500 incidents of anti-Asian discrimination between March 19, 2020 and August 5, 2020 (the most recent nationwide data to date). In Los Angeles County alone, 245 incidents of hate were reported during that period. The FBI released even more alarming figures last spring: From March to May 2020, the bureau record 1,800 racist incidents against Asians in an eight-week period — a time frame that coincided with anti-Chinese remarks made by then-President Trump, who repeatedly referred to the coronavirus as the “China virus” and the “kung flu.”

Last month, just days after the inauguration, President Biden signed an executive order denouncing xenophobia and hate crimes against Asian Americans. The Biden administration and the Justice Department have not yet released further plans on combating the rising violence against Asian Americans, but White House Press Secretary Jen Psaki said Biden would “support additional action on the local level or the federal level” when asked by CBS News’ senior White House correspondent Weijia Jiang on Monday.

If you have been the victim of a hate crime, contact local law enforcement. You can also report incidents of hate to Stop AAPI Hate here.