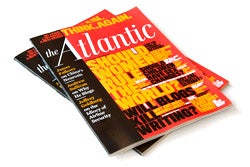 The Atlantic announced today that Michael Kinsley, the founding editor of Slate, former editor of at The New Republic, Harper’s and Los Angeles Times opinion pages, is joining the magazine.

Kinsley will write a regular media column for the magazine and, more interestingly, serve as editor-in-chief of “a new digital media property launching in early 2010.”

When I asked an Atlantic rep for more info, he declined to giveth, other than to say it’s “still in development” and that “it will be a separate property under the Atlantic Consumer Media umbrella.”

Shortly after I got the Kinsley announcement, the Atlantic sent out an invitation to a party celebrating the launch of something called “The Atlantic Wire,” an “opinion news aggregator that gathers, synthesizes, and analyzes the smartest commentary of the day.”

The rep said the Wire is not, in fact, what Kinsley is cooking.

It sounds like something The Week magazine would do, or already does: “From the op-ed pages and the blogosphere to television, radio and magazines, the Wire tracks the columnists and pundits who drive the national conversation – evaluating whose arguments are winning the day – and closely monitors The Atlantic 50, a list of the most influential commentators shaping the debate.”

Nonetheless, the Atlantic has been one of the few venerable print properties to make a relatively clean dive into the deep end online.

In 2008, the company hired Euro RSCG Worldwide, a New York-based, to help rebrand the 150-year-old Atlantic for the digital age.

“The overall effort is to make the Atlantic more contemporary,” Justin Smith, Atlantic Media’s president of consumer media, told me at the time. “It’s not an overhaul as much as a refinement—we’re a completely multiplatform business now.”

The Atlantic has also been adept at luring high-profile talent, like Kinsey, to beef up its digital cred. The most notable move was the hiring of Andrew Sullivan, the award-winning conservative blogger, away from Time magazine in 2007.

And he’s been a virtual tour-de-force. Sullivan’s continuously-updated collection of Tweets coming out of Iran in June, for instance, drove more than a million page views a day for theAtlantic.com.