Get ready for “Avatar Day.”

Having kept his 3D sci-fi adventure under wraps for so long, James Cameron is going public in a unprecedently big way.

On Aug. 21, Fox will take over as many 3D and IMAX theaters as possible worldwide to show 15 free minutes of the long-awaited film.

The director announced the marketing ploy, along with a 24-minute preview of “Avatar,” Thursday afternoon, continuing a day of big studio fanfare in Hall H.

"This is a place where I can speak from the heart," Cameron said. "I’m a fan of fantasy and science-fiction and other worlds, and it’s a privilege to unveil this sucker I’ve been working on for four years and dreaming of for 14." 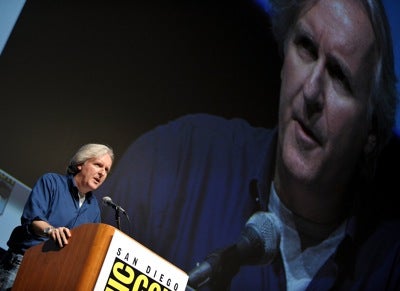 Cameron said the film was an homage to his childhood spent dreaming of another planet.

"Even though my mind was trapped in Chippewa, my mind was travelling the galaxy thanks to ‘Star Trek’ and ‘2001 Space Odyssey’ … when I was a kid, reading a science-fiction book a day on the bus. So this film is for that 14-year old boy in the back of my mind."

In the clips, a paraplegic soldier named Jake, who can no longer perform in the army, has his consciousness downloaded into the body of an avatar in an attempt to infiltrate and learn more about the native race, called the Navi. The Navi are a 10-foot tall, blue-skinned race with elf-like ears.

While trying to become one with the Navi, he meets Natiri, a Navi princess who later becomes a love interest.

"Where do you think of this s—?" producer Jon Landeau asked after the screening.

"I propose a creative problem to some of the world’s best design artists, and we sit in a stuffy world thinking this up," Cameron said. "Whatever I imagine, it’s 200 percent of that by the time it makes it to screen."

Sigourney Weaver then took the stage to explain her character, Grace Augustine, a botonist who wants to protect Pandora and its ecosystem from human industrialization.

"We just picked up where we left off," Weaver said of her relationship with Cameron, who directed her in 1986’s “Aliens.” "Jim really cares about his actors. He’ll say let’s try this and that, even when there’s a huge budget."

Zoe Saldana, who plays princess Natiri, said the role was the most physically demanding she had ever played.

"I remember (Cameron) asked me my level of tolerance when we talked about the level of training, and I told him to push me to the limit," she said. "I was taking Wu Shu training seven days a week, archery and horseback riding. If our call was at 7 a..m., we would be on set at 5:30 because he brought in a set gym. We were like Schwarzenegger."

Cameron said he first envisioned the idea for “Avatar” while CEO of Digital Domain in the ‘90s.

"We were lagging behind in 3D technology, so I wanted to create a film that would push the art of CG," he said. "When I got the script out again four years ago, I thought it was timely because of the environmental situation. But we had to develop the performance technology to live up to what the actors could do."

Cameron tried to bring reality to his make-believe world by figuring out the ecology of the atmosphere and creating the Navi language with the help of USC’s linguistics head for two years.

"The language was hard, it was like picking up French or something," Saldana said. "To talk English with a Navi accent was also very interesting."

As for the future, Cameron said hasn’t ruled out the possiblity of a "True Lies" sequel with the Governator.

"But he does press conferences, so I’ll let him announce that," he said.