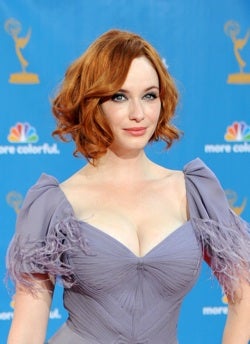 Christina Hendricks made a splash in the first episode of “Mad Men,” running the secretarial pool with a firm hand and a tight dress. Since then her character has been in and out of the ad world and in and out of bed with Roger Sterling (John Slattery), while Hendricks herself has won two SAG Awards as part of the show’s ensemble cast, and watched the show take home the Emmy for Outstanding Drama Series three years running.  She also landed Esquire’s 2010 Sexiest Woman in the World designation in a vote of the magazines female readers.  (Photo by Frazer Harrison/Getty Images)

It’s been quite a while since you finished shooting your last season …
Seven, eight months? I think we wrapped in September or October.

You’ve been busy since then, haven’t you?
I did a movie called “Detachment,” and then I did “Drive,” and then I did a movie with Sarah Jessica Parker called “I Don’t Know How She Does It.” And I did Stephen Sondheim’s “Company” at Lincoln Center, which was fun.  So yeah, I’ve been keeping real busy.

When do you start back on “Mad Men?”
It should be less than a month, I would think. Our writers are back, so that’s a good sign. But I saw Matt Weiner last night, and there’s still no definite day.

A few months ago, there was talk that Weiner might not return, and that he was being pressured to cut costs by trimming the cast substantially. Were you worried that he wouldn’t be back?
This show couldn’t be made without Matt Weiner. He is  the show. So I knew that something would be figured out. I knew it would be.

Do you have any idea what’s in store for Joan next season?
I have one little hint of what might happen, and I can’t share it. It might go away. Sometimes he’ll give me a hint and that will end up changing. And I never say what those things are, because they might show up in a different season.

Do you actively try to figure out what’s going to happen with her, or lobby Matt with ideas?
We do go visit the writers’ room and try to squeeze out any information we can, but sometimes we don’t know until we get the script. And I’ll joke and sent Matt texts: “What about this, what about this?” And he’s like, “Oh, brilliant, really good idea.” I wouldn’t mess with what he has going on.

Given Joan’s path so far – working in the office, having an affair with Roger, getting married and leaving to be a housewife, coming back to rejoin Roger and Don [Jon Hamm], but getting pregnant with Roger’s child – I guess there’s no telling where she’ll go from here.
There’s no telling. That’s what so wonderful about the show. The characters never do what you think they’re going to do, and we’re as surprised as the audience. And that makes it fantastic as an actress, because these characters are living as real a life as fake people can, you know?

Are there times when you’ve been very surprised by what she’s done?
Once or twice a season, I’m surprised by something with Joan. In season two, it was the very first script, and there was a situation where the character of Paul Kinsey [Michael Gladis] was dating a young black girl. And Joan sort of came at him and criticized him for using this girl, essentially calling him out. It was very intense and very blunt, and it surprised me. And I had to call Matt and go, “Would you explain this to me before we go in and do this?”

I think with all of us as actors, we’ve become less and less surprised as we get material, because we’re used to Matt now. Did you always figure that Joan would end up back in advertising with Don and Roger?
I hoped, because the office is where Joan thrives. And of course it’s so fun for me, because that’s where all the action is. It just allows her to sink her teeth into things. But it’s nice to see her in the office, and then see her home life, and show how incredibly different she is at home. Not all actors get a chance to do that.

You obviously can’t foresee things like three consecutive Emmys – but was it possible, when you first saw the project, to get a sense that the show might be something special?
Well, I was up for another project, and I held firm to be a part of “Mad Men.” I was just a guest star in the pilot episode, but I was so exited that I said whatever they want, I’ll do that. I was trying to just choose a project I was excited by, to take the work for the work and not the potential of it.

You must have figured that you had a pretty good shot at becoming a regular.
They said that potentially I’d be recurring, but they couldn’t promise anything.

Did the other project you’d been offered get off the ground?
No, it didn’t end up being picked up.

Why do you think people responded to Joan initially?
I think the dynamic between her and Peggy [Elisabeth Moss] played so well. Certainly in the pilot, there was this great sense of masculinity overpowering the office, and I think people responded to Joan because she was this female pillar of strength, where all the other girls seemed to be shown as victims, or fearful or scared. Joan managed to hold her own and play with the boys.

Is that what attracted you?
Well, you know, I all I had was the pilot. If you watch the pilot, really it’s just two scenes where Joan leads Peggy through the office and explains the mechanics of the office and how things work. Those were the only clues I had to who this character was. I had no idea where it was going to go beyond that.

But I thought, oh, what a fun person. This is a person who needs to be acknowledged, who needs attention, who needs to be told she’s right. And we’ve all known people like that in our lives. They’re sometimes sort of exhausting. I just thought she was kind of bossy, and a smarty pants, and that she’d be really fun to play.

After playing her for four years, do find yourself slipping into her when you’re not at work – doing the Joan walk, for instance?
I think I can separate myself quite a bit. It really is sort of a transformation once we go to work and put on those clothes and change our hair and makeup. And I can leave her at work, I think.

(Laughs) But my husband teases me and says I have that walk all the time.

TheWrap covers the 63rd annual Prime-Time Emmy Awards, to be telecast on Sept. 18.