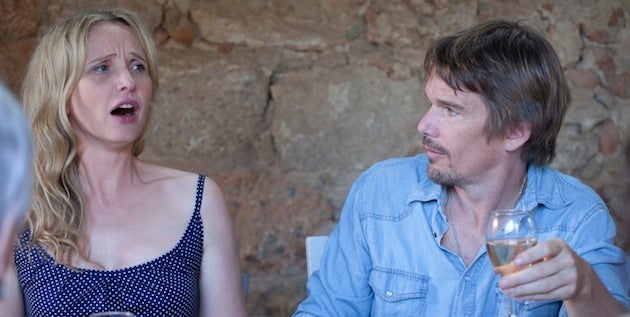 With the first six months of 2013 behind us, it's safe to say that almost none of the movies that have been released so far this year are likely to be in the running for Academy Awards in the top categories at the next Oscars.

In fact, despite the presence of a few indie gems like "Before Midnight" (photo above), a handful of strong documentaries and some big-budget extravaganzas likely to end up in the sound and visual effects categories, it has been a pretty terrible year for awards movies so far.

Of course, you can say that almost every year. Since the Academy expanded the Best Picture category from five nominees to 10 in 2009 (and then to a variable number two years later), only seven of the 38 nominations have come from films released before the end of June.

Last year, only one film from the first half of the year, "Beasts of the Southern Wild," made the cut. The previous three years, only two films did so each year, with the first-half nominees including Pixar's "Up" and "Toy Story 3" and one Best Picture winner, "The Hurt Locker."

By contrast, fully 21 of the 38 nominations went to films released in November and December, and more than two-third of the field came from the last three months of the year.

Also read: Is It Time to Expose Academy's Secret Committees?

So the odds are never good that the movies released by June 30 will be major players come Oscar time, and this hardly looks like a year to beat the odds.

Note: We're talking about theatrical releases, not film-festival screenings. The Coen brothers' "Inside Llewyn Davis," Alexander Payne's "Nebraska," J.C. Chandor's "All Is Lost," Ryan Coogler's "Fruitvale Station" and Destin Daniel Cretton's "Short Term 12," among others that may well figure in the race, miss the June 30 cut even though they have screened at fests.

Of the films that have been released so far in 2013, Richard Linklater's "Before Midnight" probably has the best shot at a Best Picture nomination. Its three writers – Linklater and his stars, Ethan Hawke and Julie Delpy – should definitely be in the running to score their second screenplay nomination, after getting Oscar recognition for "Before Sunset" seven years ago.

Jeff Nichols' "Mud," which became the top-grossing film ever released by Roadside Attractions (a company that took "Winter's Bone" to the Oscars in the past), was enough of a critical and commercial success that it could conceivably be in the mix – and if Matthew McConaughey (right) didn't have an upcoming role in "The Dallas Buyers Club" that sounds ready-made for Oscar, he might have a good supporting-actor shot for the film,

Noah Baumbach's "Frances Ha" is a possibility for its screenplay by Baumbach and Greta Gerwig, a longshot for actress recognition for Gerwig and a deliciously tantalizing longshot for cinematographer Sam Levy.

Darek Cianfrance's "The Place Beyond the Pines" played to mixed reviews, but the Writers Branch, at least, likes to take chances and embrace indies, and Focus Features (which scored with the best-pic nominee "The Kids Are All Right" three years ago) plans to campaign for the film in a number of categories, including picture, director, writing and acting.

And while Pixar's "Monsters University" didn't draw the unanimous raves of the company's string of Oscar-winning classics that included "Ratatouille," "WALL-E," "Up" and "Toy Story 3," it is entertaining enough to be a strong contender in the Best Animated Feature category.

But what else? The year's top-grossing films to date are "Iron Man 3," "Oz the Great and Powerful," "Fast & Furious 6," "Star Trek Into Darkness" and "Man of Steel," none likely to register strongly outside the effects and sound categories.

Could the year's seventh-highest grosser, Baz Luhrman's "The Great Gatsby," sneak in? I hear it drew the biggest audience anybody can remember to its New York AMPAS members screening, but its mixed reviews probably push it out of the running unless a lot of the prime year-end contenders crash and burn.

If you look at the year's most critically-acclaimed films, documentaries occupy most of the Top 10 at Rottentomatoes.com, with two music docs Dave Grohl's "Sound City" and Morgan Neville's "20 Feet From Stardom," leading a list that also includes "Call Me Kuchu," "Stories We Tell," "One Life" and "Room 237." Of those, "20 Feet," "Kuchu" and "Stories" probably have the best shot at Oscar nominations (or at least spots on the 15-film shortlist), along with "We Steal Secrets: The Story of WikiLeaks" and a few others that have shown at festivals but have yet to be released.

For the most part, though, the outlook in the documentary category is the same as it is in Best Picture. Which is to say, if you're looking in theaters for this year's nominees, it's best to go away and come back later.