Didn’t catch Baby Groot in the first “Guardians of the Galaxy Vol. 2” trailer? We don’t blame you — he’s so tiny, he’s easy to glance over.

After the trailer debuted on Wednesday, fans were quick to post their thoughts about the little character, as well as screen grabs of Baby Groot’s cameo.

Baby Groot shows up at the end of the teaser, on the shoulder of the Bradley Cooper-voiced Rocket Raccoon. Here he is: 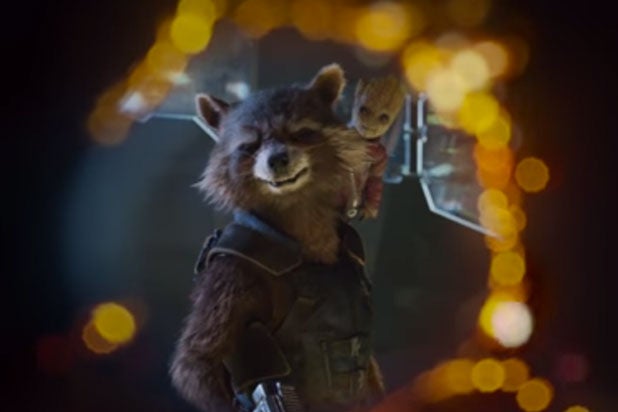 People couldn’t contain their excitement about the little one, sharing their awe about his little leather jacket and just how plain adorable he is.

Baby groot is everything!! https://t.co/duq3WFuqHM

I can only imagine the boat loads of money Marvel is about to make of Baby groot merchandise https://t.co/Su6SU81HM9

That baby groot looks so adorable

baby groot is already my favorite

All I can say is Baby Groot ❤️ !!! #GuardiansOfTheGalaxyVol2

“Guardians of the Galaxy” was a major worldwide success when it premiered in Aug. 2014. The film grossed over $770 million at the box office, with more than $330 million of that coming from the U.S.

Director James Gunn also shared the first poster for the film on Wednesday, a few minutes before the trailer’s debut.

“Guardians of the Galaxy Vol. 2” is set to premiere on May 5.

In case you missed it, watch the trailer here.

Disney and Marvel dropped the first trailer for ”Guardians of the Galaxy“ Tuesday night to much fanfare. TheWrap grabbed up some groovy screenshots you might’ve missed — if you dared to blink.