We are down to five girls and the road trip had come to an end in San Francisco. Jake will eliminate one more girl before we have the hometown dates next week.

As the RV is pulling up to the hotel, the girls are all giddy and someone says, “Where’s our man?” That they think they are all friends is very entertaining. They are just ridiculous and the silliest of all is Tenley, who gets the first date.
Tenley’s voice grates on my nerves. She sounds so sugary and childlike. If I were a guy, trying to make out with this chick, her voice would bug the crap out of me. She is annoying and her naivete is not attractive. She has milked the divorce card about as much as I can stand.
They are headed to Chinatown for some exploring, which I think is a fabulous date. Jake is wearing a black turtleneck sweater and he looks absolutely fabulous. A man in a turtleneck is very sexy and Jake is rocking it. He looked so good that I forget about how annoying Tenley is for a minute.
Back at the hotel, the next date card arrives. It’s a double date, and Corrie says it’s for Vienna and Ali. Ali’s response is that she feels sick at the news. This girl is mean. She thinks she can scare Vienna, but it’s not happening. She is a joy-sucker and I’m on Team Vienna.
Corrie is kidding and it’s really Vienna and Gia who go on the date. Vienna is upset, but a lady, and wants to walk away from Ali. Ali tells Vienna that if she is upset with her, she should tell her. Vienna tells her she is still upset from the last rose ceremony where Ali was mean.
Ali says it’s not about Vienna, which is a total crock because last week she said it was all because of Vienna. Ali is horrible. She was my top pick on the first day, but no more. I met her at the Bachelor house and she was sweet, but now thinking back, I see she was conniving and mean-spirited then, too.
Tenley and Jake are now having dinner and Jake is talking like he planned the whole thing. It cracks me up. I’m sure he found out that morning what they planned for them, yet he talks like he planned it weeks ago.
Jake says Tenley is the one he can most see as his wife. I just don’t get it. It will be like two pieces of white toast getting married and making a loaf of white toast babies. I’m bored just thinking about it. He tells her she knows more about marriage than he does, and they should talk about it.
Jake, she was married for five minutes and her husband left her for someone at work. She may not be an expert. I would suggest listening to your parents’ take on matrimony over the Disney Princess. I’m just saying. Jake talks about what he thinks a marriage is and it’s lovely.
He tells Tenley that marriage will never be perfect, but the love can be. That is my defining moment with Jake. I fell in love with him, and after all these weeks I finally get his appeal. Perhaps white toast is not too bad if you spice it up. The problem is Tenley is mayo, which is boring on boring. 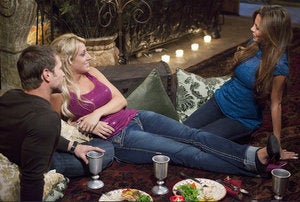