I am hooked on this season of "The Bachelor" and it’s only been on two weeks!

Last night was a series of train wrecks that would not stop. Just when one of the chicks did something to make you think she was a loon, the next one would turn out to be a whore. It was fantastic. 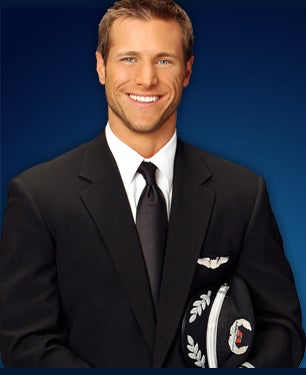 Michelle is the Mayor of Crazytown. This chick seriously needs to be kept away from sharp objects. She is going to stab someone, or perhaps herself, and the good news is that we will all be able to see it on YouTube because a staffer will sell the footage. Staffers do a lot of bad stuff on "The Bachelor," but we’ll come back to that.

I laugh out loud when the girls scream at the mention of every date. I laugh even harder when they speak about Jake like he planned the whole thing. He planned nothing. My king, Mike Fleiss, and his peeps are the masterminds behind all these dates, and when Jake takes credit we all know the truth.

The first date is a photo shoot for InStyle. Roz, the whore, says Jake is so cute she wants to bite him, then lifts her leg and flashes her hoo-ha. So classy.

Christina, the girl next door, is sincere; she is so nervous that it’s charming and you feel for her. She is, however, a sloppy drunk and looks like she’s had Botox injections directly into her eyeballs. I would watch an hour of her just being drunk and trying to talk.

I think Gia is the prettiest girl; last week I said I would like a week in her body. Here’s the thing: I would be happy to take a day. I just can’t imagine what it must be like to be that pretty.

Jake is winning me over, but he is clearly all about the swimsuit — it’s fascinating to watch him be in a deep conversation with Gia and then shut off immediately whenever a swimsuit comes by. Love it.

Ally, the Sleeping Beauty look-a-like, got the one-on-one date. When she got on the Harley in a yellow mini dress, I thought I was watching "Rock of Love" and had to regroup. I am perplexed how a girl who has missed out on family vacations because she does not fly was able to get into a lawnmower and fly for an hour. Was her flying fear fake? Yup. Good for her. It was a risk, but she won. Bravo. She is a lucky girl, particularly because her dress did not fall off as she ran across the grass.

The second group date was hilarious. Elizabeth did not disappoint — she is totally the secret Queen of Crazytown. She told Jake he couldn’t kiss her unless she is the last girl standing. Is she insane? He is seriously going to not kiss her unless he wants to marry her? What is that noise? It’s the nails going into your coffin, Crazy. You just sealed your own fate. Dumb. Dumb. Dumb.

Vienna is rapidly becoming my favorite tranny. She wins the Worst Hair Extensions on Television award. It’s a title that is being passed on by Britney Spears, so she should be flattered. Turns out she was so crushed by her high school boyfriend dumping her that she married a stranger just to get back at him; then she got divorced four months later. Maybe they got divorced because she forgot to tell him she was a he? I love this “chick” and hope she stays a little longer for pure entertainment.

Ashley the teacher reminds me of Wonder Woman. When she got the blow-off hug with no kiss, you knew it was over for her.

Jake gave a birthday cupcake to Ella and he talked about how he loved the wings her son sent for him. I’d be willing to bet she totally manipulated that whole thing, and that if you asked Ethan what he wanted to be, it would be a fireman, not a pilot. Good ploy, but I hope that doesn’t blow up in her face.

I’m over Tenley. She was my top pick last week, but now I think she’s on her way out. She’s had two opportunities to tell Jake she is divorced and passed twice. Not good, sister. She’s out for me.

I have to mention one more time that Michelle is in serious need of help. She is really, really on the edge of a breakdown and I hope Jake keeps her around long enough that we can see it.

Then we come to the big moment that has been hyped up for a week. Rozlyn, the whore, is kicked off the show for sleeping with a staffer while the show is being taped. Really? You can’t write this stuff. He’s fired and she’s kicked off and stands there saying nothing.

Important to note that Chris Harrison is simply fabulous with just the right amount of pissed-off and compassion. I love this guy.

Chris and Jake come to tell the girls that Rozlyn is out and they all start crying. Seriously? I would have been jumping on the furniture to have a frontrunner out the door, but they are all bawling and it’s hilarious.

They are all talking about deception and lies and it’s perfect. Tenly is mortified and was reminded of how she was lied to but has not told Jake she was married. They have all lied and the panic has set in that they will now get caught. Fabulous!

With Rozlyn, Christina and Ashley now gone, Jake is down to 12. It’s going to be a great season and I’m excited. Also looking forward to the "Bachelor" pad this summer. I just can’t get enough. Next Monday will be another trip to Crazytown.