The coming weeks are going to be mighty busy for the old guard of Hollywood’s bad boys.

On Monday, at 2:15 p.m., the day before he returns to work on "Two and a Half Men" after a stint in rehab, Carlos Estevez (Charlie Sheen’s real name) will be in Aspen facing domestic violence charges. They stem from a Christmas Day confrontation between the actor and his wife, Brooke Mueller. If found guilty, he could face up to five years in jail.

Then, on March 18, Tom Sizemore goes on trial in downtown L.A. on domestic battery charges as the result of an incident near downtown on Aug. 5. Sizemore was on the last season of “Celebrity Rehab With Dr. Drew” and appears in the new season of VH1’s “Sober House,” which debuts Thursday night.

Sean Penn — who starred in 1983’s reform-school drama "Bad Boys" — was scheduled to be arraigned on March 22 on misdemeanor charges of battery and vandalism from a heated encounter with paparazzi last October. On Tuesday, his lawyers were granted a continuance to have that arraignment pushed back to April 22 at the Airport courthouse near LAX.

Each is a repeat offender. 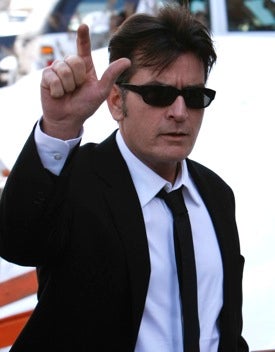 The Court Date: March 15 in Aspen.
The Charge: Felony menacing and misdemeanors of 3rd degree assault and criminal mischief.
The Circumstances: Aspen Police received a 911 call on Christmas Day from a crying and intoxicated Brooke Mueller, claiming that her 44-year old husband was trying to kill her. The cops went to the couple’s vacation home and arrested the actor, who allegedly was waving a knife around and holding her down.
Mueller, who police said had red marks on her neck, reportedly had said she was going to divorce Sheen and take the couple’s year old twins. Sheen, who admitted in his statement to police that the couple had been slapping each other, was booked and released on $8,500 bond.
The couple, who were temporarily court ordered to stay apart, have since reconciled, with Mueller entering rehab and refusing to participate in the prosecution against her husband.
On Feb. 23, Sheen entered a rehab facility as a “preventative measure,” and production on his show, which had several episodes left to film this season, shut down.
On Tuesday, Sheen’s publicist said the actor would be leaving rehab and getting back to work the day after appearing in court in Aspen.
The Priors: Well known for his past love of hookers, drugs and booze, Sheen has also had at least two accounts of violence against women. There was a two-year probation in the late ’90s for his assault of then-girlfriend Brittany Ashland in 1996. A year before, he settled out of court with a woman who said he struck her after she wouldn’t have sex with him.
Sheen’s second wife, actress Denise Richards, with whom he has two daughters, has claimed the actor threatened to kill her when they were together.
The Consequences: The domestic violence charges against Sheen carry a combined sentence of up to five years, with the most serous charge, the felony of menacing, coming with three years in prison. That could escalate if the Aspen D.A. determines that the actor has broken his bail bond with stipulated no drinking or drug use.
It has been reported in some media outlets that despite the 911 call, Richard Cummins, Sheen’s Aspen lawyer, will be entering a clear plea of not guilty. While Deputy D.A. Arnold Mordkin, who is running the prosecution, told TheWrap that his office had “no comment” on the case, an Aspen individual close to the case told us that the D.A. intends to “send a message of zero tolerance on domestic violence” and that Sheen “won’t walk away unscathed.”
TOM SIZEMORE 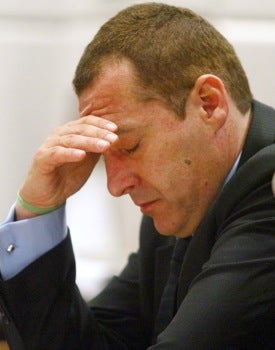 The Court Date: March 18 in downtown L.A.
The Charge: Domestic battery.
The Circumstances: On the evening of Aug 5 last year, the “Saving Private Ryan” actor was arrested for repeatedly slapping a female companion on the 100 block of Beaudry Avenue. Next to a freeway underpass, the area near downtown L.A. is as bleak as the admittedly drug addled Sizemore’s past run-ins with the law — including a previous incident with the same woman back in February 2009 — and his declining career.
While the filming of “Celebrity Rehab” and “Sober House,” which was shot in June 2009, occurred before the Beaudry Avenue incident, Dr. Drew Pinsky told TheWrap that Sizemore “did well at Sober House.” Calling Sizemore “a great guy when he’s sober,” Pinsky says he last saw the actor three months ago and that Sizemore told him that “he’s sober and that he’s going to meetings.”
Sizemore’s longtime lawyer claims his client’s drug use days are over. “Mr. Sizemore is getting his life back on track,” Mark McBride told TheWrap. “He is clean and sober, and is making great movies again.”
The Priors: Besides various drug offenses and parole violations, the actor was also convicted in 2003 of assault and battery of then-girlfriend Heidi Fleiss, who was featured with Sizemore on the most recent season of “Celebrity Rehab.”
The Consequences: If convicted, Sizemore could pay out a hefty fine and spend a year in jail. However, a trial might not happen after all. “It appears quite likely that a resolution is going to be reached short of a trial in this matter,” lawyer Mark McBride told TheWrap.
While declining to give specific details Sizemore’s attorney did say the resolution being discussed is “quite favorable to all parties involved.” The L.A. district attorney’s office had no comment on the case.
SEAN PENN
The Court Date: April 22 at the Los Angeles Airport courthouse.
The Charge: Battery and vandalism.
The Circumstances: On Oct. 2, 2009, the two time Oscar winning actor got into a yelling and kicking match with photographer Jordan Dawes outside Brentwood Country Mart. As caught on camera by TMZ, a profanity-shouting Penn went out of his way to go across the street to the photographer, lashing out at him. In the incident, the actor allegedly broke Dawes’ camera.
In this latest case, Penn has been making none of the customary attempt to keep a low profile that celebs usually do in these situations. He has been helping earthquake victims through JP Haitian Relief Organization, a charity he co-founded. And he rhetorically raised more than a few eyebrows when he responded to critics of his efforts in Haiti by telling “CBS Sunday Morning” that he hoped “that those people die screaming of rectal cancer.”
According to his  publicist, Mara Buxbaum, the actor is currently heading back to Haiti.
The Priors: Over the last two decades, the actor has tussled with tabloid cameramen verbally and sometimes physically on a number of occasions. An incident in 1987  saw Penn sentenced to 60 days in prison, of which he served 33.
The Consequences: Penn could be sentenced to 18 months in jail if found guilty of both charges. Will it happen? On one hand, Kayne West and Gerald Butler got off with mere community service after their respective pushing and shoving with the paparazzi. But they didn’t have previous histories to deal with. And according to city officials at the time, it was decided to file charges against Penn only after reviewing the rather explicit video. Considering how serious the charges are, the possibility of the man who played Jeff Spicoli doing time is very real indeed.
x