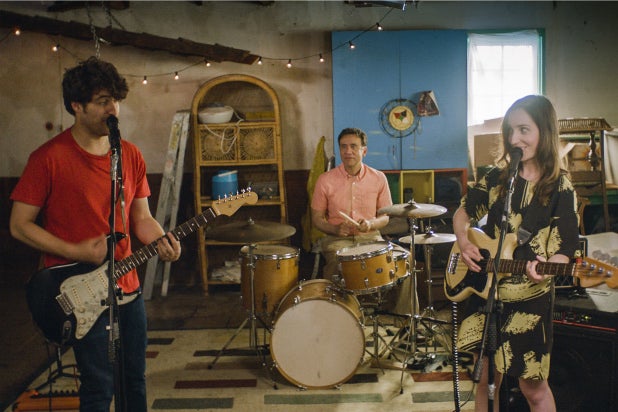 The history of pop music is littered with couples whose eventual marital rifts made their way into the music. (Where would Fleetwood Mac have been with two happy marriages?) In her directorial debut “Band Aid,” Zoe Lister-Jones flips the script (she’s also the screenwriter, incidentally), looking at a miserable husband and wife who decide to channel their arguments into songs.

And if misery is the motor for their songwriting, Anna (Lister-Jones) and Ben (Adam Pally) have enough material for several double albums. She’s a frustrated writer working days as an Uber driver, while he has given up on the visual arts for a go-nowhere gig creating corporate logos.

The elephant in the room is their sadness over a miscarriage — what they talk about instead is who’s going to do the dishes, a spat that these two somehow steer into a discussion of the Holocaust. Anna and Ben seem headed toward divorce, but at a friend’s kid’s birthday party, they pick up toy instruments and start singing their disputes, and a band is born.

With the help of oddball neighbor Dave (Fred Armisen) — the more we learn about this eccentric, the more fascinatingly strange he becomes — and his drumming skills, the couple start turning their dysfunctional marital lemons into strangely catchy lemonade. (Lister-Jones also wrote all the songs with Kyle Forester.) But this marriage will need more than a hook to solve its deep problems.

“Band Aid” might sound gimmicky, but Lister-Jones keeps the emotions firmly rooted and the characters believably contextualized: Both Anna and Ben are the sort of free-floating semi-bohemians who would believably have an old electric guitar and bass tucked away in their garage. Their career ruts, their marital disputes and their underlying mutual love all rings true, making what could have been merely a wacky high-concept premise into a relationship’s genuine and deeply felt cry for help.

I am unfamiliar with Lister-Jones’s previous work (she is best known for the sitcom “Life in Pieces”), but she’s a compelling screen presence, on top of her achievements as a writer-director; her close-ups register glib resistance and genuine vulnerability, often in rapid succession. Paired with Pally — so hilarious in the canceled-too-soon TV classic “Happy Endings” — the two actors make this couple’s highs and lows equally resonant.

Lister-Jones is also generous enough an auteur to allow for memorable moments from others, whether it’s hilarious bits from the likes of Retta (as Anna and Ben’s unlucky marriage counselor), Brooklyn Decker, and Jamie Chung; the escalating weirdness of Armisen (who was, of course, a seasoned indie-band drummer before he turned to acting and comedy); or a knockout dramatic scene between Pally and the great comedian Susie Essman as Ben’s mother, who provides some invaluable advice.

Also Read: Fred Armisen Showed Up at the Emmys in a Hearse

“Band Aid” also manages to be a great-looking film for what was no doubt a fairly small budget; cinematographer Hillary Spera (“After Tiller”) shoots Los Angeles in an intuitive way that’s neither overly glossy nor distractingly stylized. One of the movie’s selling points is that it’s the first feature film to employ an all-female crew; that we had to wait until 2017 for this milestone fairly boggles the mind, but now that this ceiling has been shattered, long may this practice continue.

Don’t expect couples therapy classes to open up at your local School of Rock, but do enjoy this movie’s exploration of solving discord with three chords.