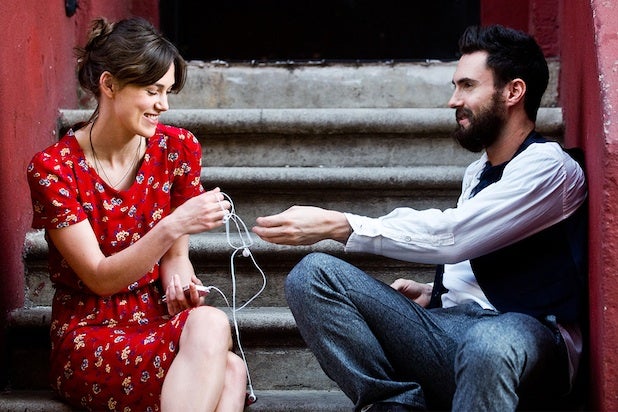 John Carney‘s “Once” was the kind of deft balancing act that couldn’t be done twice — an intimate, ragged and touching slice-of-life musical made on a shoestring budget with non-actors who wound up winning an Oscar for the song “Falling Slowly.”

So when Carney returned with another movie based around music and a cast that includes Keira Knightley, Mark Ruffalo and singer (and “Voice” coach) Adam Levine, “Once” fans could be forgiven for wondering if the Irish director could possibly pull it off again. But “Begin Again” is another small wonder — an unabashedly open-hearted charmer that contains touching and vibrant songs that could well put a Carney film back in the Oscar song race.

The film, then called “Can a Song Save Your Life?,” sparked a bidding war at last September’s Toronto Film Festival, and was picked up by the Weinstein Co. It will debut on Friday in Los Angeles and New York, and expand it more widely next week.

While preparing for the fall shoot of “Sing Street,” a grittier musical film set in Dublin in the 1980s and featuring new songs by Bono and the Edge, Carney talked to TheWrap about finding the magic twice, dealing with movie stars and reveling in conflict.

It must have been tricky to retain that sense of intimacy and heart with more time, more money and bigger stars.
Absolutely. I’d be kidding if I said it wasn’t a challenge. Not so much because of the money, but because of the movie-star thing. And not because there were any egos or anything on the set — in fact, the very opposite — but just because of the paparazzi being around all the time. We couldn’t shoot it the way we shot “Once,” obviously, but I wanted to bring that style and that approach to “Begin Again,” and shoot on the streets of New York.

We kept the people back as well as we could. We were a small unit, and if you keep moving, it’s OK. It’s when you settle down to repeated takes of anything, that’s when you get into trouble.  But it is a style of filmmaking that I very much like — and this film is a personal story in many ways, and a small, distinct story. It’s not like I got $100 million to make my next movie and I shoehorned all these movie stars into it.

What was the initial idea?
An A&R man who was around in the ’80s and had a sort of charmed life. Flash forward to 2014, the money has run out, the way of signing bands and discovering bands has changed. He’s a bit of a dinosaur, he needs to get his mojo back, and he meets a singer-songwriter who for her own reasons is wary of the music industry.

That was the original starting point for the movie — two characters colliding over the same issues from very different points of view. And the give and take, the compromises and what they learn from each other as they proceed to create something.

Why is the musical form so appealing to you? It’s not easy to pull off onscreen these days.
I know. I’ve got the “Once film,” and I’ve got a show on Broadway [the stage adaptation of “Once”], and in Korea and London. And this new film coming out. And the next film I’m doing has a musical dimension to it. So it’s a good question.

Also read: U2’s Bono, The Edge to Collaborate With ‘Once’ Director John Carney on ‘Sing Street’

I came from a musical background. I formed a band when I was in school very early, and then I left school to be in a proper band. And when I was watching films when I was younger, I always imagined that the music you were hearing was like the director’s voice. If you watch movies from the ’30s or ’40s, David Lean or Frank Capra or Fred Zinnemann films, just listen to the music that plays over the titles at the beginning. It’s phenomenally rich, beautiful, scene-setting music that sets up the whole tone of what you’re about to watch.

That marriage of music and imagery is so strong that I always imagined that the two things went hand in hand. And then I watched a lot of ’80s rock videos on “Top of the Pops” in Ireland, and somehow I was so moved that I found dialogue-driven films lacking something.

When I started directing I shot some rock videos, and any film or TV thing I did, I would be accused of having too much music in it. Then when “Once” came along, I was like, “I’ll show you too much music.”

It’s fascinating the way that the first song in “Begin Again” is shown twice in fairly quick succession, but it serves a very different function each time. You use the same music to take the audience to two very different places.
I think that’s a great way of putting it, yeah. And that’s what music is, isn’t it? It means a different thing to each audience member — more so with good songs. A straightforward rock song is kinda boring because it means the same thing to pretty much everybody — you can’t interpret a bad rock lyric or a bad guitar riff. But a great lyric or chorus can mean a million different things. A good song is very elastic.

At what point did Keira Knightley and Mark Ruffalo come on board?
Mark was on it from very early on. After I finished the first draft of the script. I always wanted him to do the movie, and I had to talk him into doing it, which was really good fun.

Numerous actresses had kind of like circled the project, but hadn’t quite landed. Scarlett Johansson was going to be the girl for a while, but that didn’t work out. And then I met Keira in London, and sort of thought that it might be fun to explore the Audrey Hepburn thing a little bit with her — it was a good contrast with the sort of disheveled, down-on-his-luck Mark Ruffalo character.

The movie has actors who haven’t sung and singers who haven’t acted. There has to be a challenge in getting everybody on the same page.
Yeah, there really is. Like, Adam and Keira couldn’t have been more different. He was a singer who was acting, she was an actress who was singing. They were both outside their comfort zones — but isn’t that the cliché that that’s where the magic happens?

As a director, what do you have to do to make it work?
You have to sort of explore the conflict between the actors, and between yourself and the actors. Maybe it is like a marriage, in a way. You’re never going to exactly agree about what you’re doing.

It’s almost like, as a director you try to express something to an actor, a way that you’d like them to do it. But they can’t do it that way, or don’t want to do it exactly that way. So they’ll say, “Let me try this and show you this.” And they show you it, and maybe it’s better than you could have imagined it. Or it’s too different, so you say, “Can you do it this way?” And they go, “Well, not exactly that way…” And through that you find something that satisfies both the actors who perform, and the director who knows how it will fit into the overall story.

In Toronto, your film prompted the biggest bidding war of the festival.
Yeah, but we all know that business stuff doesn’t mean anything in terms of the film. But I love this movie and I’m proud of it. And I think that if I saw it, it would win me over. It’s a very optimistic, hopeful film in many ways, and very much my worldview, to be honest.

The sadness and melancholy of “Once” is sometimes the cruel fact of life. In a way, I guess, “Once” was more specific to that time in my life, when I was a little more sorrowful and a little bit more sad and questioning about relationships. With this film, I was in New York in the summer, a few more positive things had happened and I had a little bit of money in my pocket for the first time in my entire life. And I hope that comes across in the film.

My worldview is that we need to keep moving, to keep singing and writing and imagining new possibilities in things. For one character you might have to move forward, and for another character it’s like the Dorothy line in “The Wizard of Oz”: If you can’t find what you’re looking for in your own back yard, maybe you never lost it in the first place.

Maybe for some people, to begin again is to go back to what they knew and begin again. And for other people, it’s to move on and find a new future.

Speaking of the phrase begin again, why did you change the title from “Can a Song Save Your Life?”
“Can a Song Save Your Life?” was never really an official title of the movie. It was something I wrote down to remind me of what I should be writing, a way to remind myself of a main theme of the movie. Mainly, does art have a whole other job in life? Not just for entertainment or to kill time, but it’s actually there to help us make the biggest decisions of our lives.

I didn’t mean for it to be the title for the film, but it just stuck. And we changed it for various reasons — but primarily because people were misquoting it, and couldn’t remember it well, and weren’t warming to it.

I think when I saw it in the context of other movies at Toronto, it seemed to me to be slightly like it was trying to answer that question. And I do not want to be a filmmaker who is appearing to answer questions.

When you go into a film with a question mark, the truth of it is you expect to get an answer. And I don’t have any answers. I just have some suggestions and thoughts.