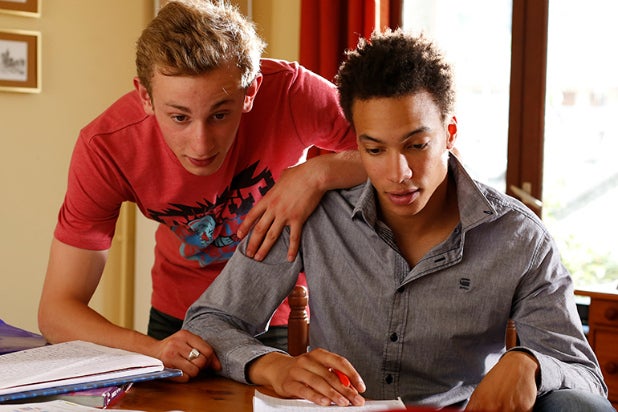 Damien (Kacey Mottet Klein, “Gemma Bovery”) and Tom (Corentin Fila) dislike each other very much. It’s the kind of hate that blooms at first sight, and with little to no provocation these French 17-year-olds trip each other up, deliver schoolyard beatings, and make appointments to really bring the pain in the nearby woods with private brawls that bruise torsos, scrape knuckles and fracture bones.

“Being 17,” André Téchiné‘s crisply executed examination of teenage self-discovery, pairs the 73-year-old director with screenwriter Céline Sciamma (“Girlhood”) and returns him to territory he marked in his 1994 hit “Wild Reeds.” Yet this time around, he’s even more intently focused on the defensive rituals young men enact when they can’t quite keep their hands off each other.

Both boys, it turns out, come from loving and decidedly non-violent homes. Damien lives in town with his mother Marianne (Sandrine Kiberlain). His father (Alexis Loret), a military man serving in the Middle East, pops in on Skype at dinnertime. Tom lives on a farm in the outlying mountain region with his own adoptive parents, and Marianne becomes doctor to Tom’s pregnant mother Christine (Mama Prassinos).

Also Read: Ryan Murphy: The WB Was 'Relentlessly Homophobic' When 'Popular' Was on the Air

When Marianne invites Tom to live in town with them during the school week to make his daily walk to class — an hours-long, snow-hindered trudge — less arduous, the teen enemies are forced into a simmering détente. More to the point, their cohabitation also forces them to sort out the fact that they’re both gay, and quite probably in love with each other.

Inchoate desire is an ongoing theme in coming-out stories, but Téchiné has never been particularly interested in locking down his characters into easily remedied problem/solution scenarios. He and Sciamma have created two young men whose burdens are typically adolescent. Their mutual loneliness and awkwardness, their need to be independent and also to belong, exists apart from of much of LGBT cinema, with its frequent reliance on identity-based narratives. (The film takes a similar approach to the young men’s racial differences.)

But Téchiné also understands the sometimes painful specifics of growing up gay. Damien and Tom, acting out boyhood patterns in which playful torment is inflicted on the object of one’s affection, find themselves mixed up in a parallel tendency in an anti-gay world, tormenting oneself for nonconformity. It’s a short hop, then, for gay boys to target one another for a little performative violence, just before calling a temporary truce, sharing a cigarette, and diving naked into an ice-cold river. Every action jump-starts internal conflict and pushes the young men into a stumbling dance with their sexual selves.

Calling to mind the sullen lovers of Wong Kar-wai’s “Happy Together,” the young men of “Being 17” are more gestural than verbal. Téchiné intuitively favors movement over chatter, and he directs his young actors toward intimate, yearning performances. Cinematographer Julien Hirsch, a longtime Téchiné collaborator, and editor Albertine Lastera (“Blue is The Warmest Color”) engage with the momentum of the young men’s bodies, close in on frustrated faces, and betray emotional truths before Damien and Tom even think about forming the words to explain themselves.

The camera is similarly invested in the story’s semi-rural setting, and carries on a parallel conversation with the boys’ environment. In the first half of the story, inclement weather, snowstorms, and frozen temperatures are nature’s teen indifference and sullen self-pity, all the more appropriate for pushing your future boyfriend’s face into the slushy mud.

But Téchiné and Sciamma, lacking in sentimentality almost to a fault, still offer their young men the space to change with the season. As the third act gives way to an obviously symbolic spring thaw, and a quiet embrace of the freedom, pleasure and affection they need, the boys slowly and haltingly lay down their fight for the sake of love. It’s a moving act of generosity from an older gay man to the generation just now becoming men themselves.