The internets were abuzz last week as Disney released the first teaser posters to its upcoming epic videogame-based adventure fantasy "Prince of Persia," starring Jake Gyllenhaal. The buzz surrounded not the images on the posters themselves but the type font used to create the title treatment.

To its credit, Disney went with a modern Helvetica font that invoked feelings of looking at fashion magazines rather than the font movie studios regularly turn to when invoking that desired “this is an epic motion picture that cost us a lot of money so you better go see it because our mortgages are on the line” feeling.

That font, is called Trajan and you can see a little YouTube video here that shows you exactly how many times Trajan is overused in the Hollywood film business.

But the question has been asked why Disney chose the new font and exactly what that means for the future of film marketing. While I don’t have spies within the Disney organization (anymore. Any volunteers?) I can surmise a few things that went through the marketing department’s collective head and conference calls when it developed this artwork campaign.

In order for "Prince of Persia" to succeed in the theatrical marketplace and be successful, it has to be seen by more than the core videogame audience. That’s why just like the poster, the cast is young stylish and hot.

It must have a modern appeal even though the subject matter is rooted in classic myth and supernatural adventure. In order to succeed in the theatrical game you have to hit all four quadrants – the four major demographic groups comprising most theater-goers. 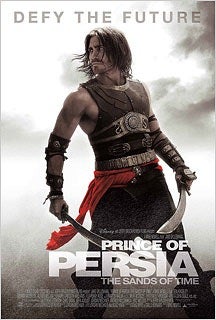 So instead of a tired old font like Trajan, Disney brought in the rookie Helvetica font out onto the field. The font is used frequently in fashion and modern upscale lifestyle magazines and its not a bad thing to have Mr. Gyllenhaal looking like he’s posing for a photo shoot.

All designed to send the message — this isn’t exactly the videogame movie you think it is. Strike that – Disney would rather you think this is an epic romantic movie adventure than know it’s a videogame movie.

Or at least the female quadrant of the four. After all, women are the ones primarily reading the fashion and lifestyle magazines. Disney doesn’t mind that young game players know it’s a videogame — they have that audience — they just aren’t going to advertise that fact to the other three quadrants in their target list.

The second signal that the "Prince of Persia" key art design sends is that times are changing. Just as DVD key art changed the look of movies with its squattier, boxier format, so too is the digital revolution changing what key art means. New fonts, new widescreen looks — all thanks to smaller and wider screens on our computers, iPhones and iPods and PSPs.

As fewer paper posters are actually printed, and fewer newspaper ads placed, we begin to notice the evolution of key art and becoming more horizontal to accommodate billboards, laptop and HD screens.

We are seeing simpler design that play well not only in large format situations, but on small screens like our portable digital devices. You can’t get much simpler than young Jake there grasping swords readying for battle.

You can see a more action oriented version of that same aesthetic in the new poster for the Wachowski Brothers’ latest visual treat, "Ninja Assassin." Again, simple design with a clean font for clear communication of the movie’s “cool.”

And of course, because our screens have become smaller, our fonts must become cleaner and easier to read. Goodbye Trajan, hello Helvetica (and Century Gothic, et al). New media begets new visual grammar.

There are some that are laughing and wondering if its necessarily a good thing that we in the movie marketing community are making a mountain out of a molehill.

Isn’t it a bad thing that people are focusing on the font and not exactly on the movie itself? I say Disney should take the win. Any discussion is good. It’s only bad when they aren’t talking about you.

For too long Hollywood design was stuck under that molehill rotting away. Too many movies looked exactly like one another that is was often hard to tell them apart. You know – big head image with an action scene inset ?

All were emblazoned with a Trajan font and sent out into the world to make their $100 million opening weekend.

That world doesn’t exist anymore more. Neither should its key art.