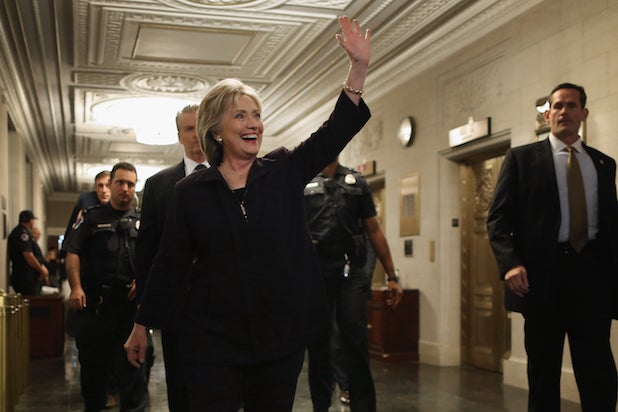 A new batch of emails released by the State Department on Friday revealed that as secretary of state, Hillary Clinton exchanged messages with her aides about stars including Ben Affleck, Lisa Kudrow and Lady Gaga.

In one of the newly released email exchanges, Clinton asked for Lady Gaga‘s address so she could “write a note” after the pop star defended Clinton’s fashion choices on “The View.”

One of Clinton’s aides forwarded the secretary of state a blurb from CNN in which the singer called “Project Runway’s” Tim Gunn a “bully” for criticizing Clinton’s style. “Can you get an address for her so I can write a note?” Clinton replied.

In another email exchange, Clinton asked her assistant secretary of African affairs, Johnnie Carson, to draft a response to a message from Ben Affleck regarding his Eastern Congo Initiative. “I’d like to respond to Ben Affleck. Pls advise. Thx,” she wrote.

Messages from aides Anne-Marie Slaughter and Huma Abedin passed on compliments about Clinton’s looks, with Slaughter writing that her son commented that Clinton looks like former “Friends” star Lisa Kudrow.

The emails also revealed that Clinton, like many people of her generation, is not immune to struggling with technology from time to time. “Here’s my question: on this new berry can I get smiley faces?” she wrote to aide Philippe Reines in February 2012.

Reines did his best to help the secretary with her request, but had to inform her that in emails on her Blackberry device, she would have to “type them out manually, like 🙂 for happy, or :-I I if you want to express anger at my tardiness.”

“For text messaging, the chart might be there in the lower right, next to where you type the message. If it’s not, I THINK that if you type 🙂 it MIGHT automatically convert it into a symbol,” he wrote. “Try it.”